A walk through forest, alongside an old railway tunnel and close to the West Hoathly heritage village

Section 3 of The Railway Children walk includes some heritage sights and a pleasant walk through Forestry Commission land (permissive path). 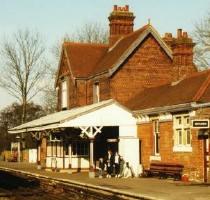 Leaving Tickeridge Farm (OS ref: 365355) behind you, cross the road into the Forestry Com-mission road opposite, marked Birch Farm, Mill Place Farm, etc. (The Bluebell Railway line can be seen on the left from a number of points along this road.) Stay on this road, ignoring all tracks to left and right.
In about half a mile, where the road begins to go downhill (signposted Birch Farm Nursery and Mill Place Farm) continue ahead, passing Brookbank Cottage on the left. Shortly afterwards, at the gateway marked Birch Farm Nursery, turn left on the road that leads to the Bluebell Railway line and Mill Place Farm. Immediately before the railway bridge (OS ref: 372347), turn sharp right onto the footpath that runs back through a copse (ignore the track rising into the field)

When the footpath reaches the surfaced road, bear left and continue forward toward Birch Farm Nursery.
Where the curving road rises to the entrance to Birch Farm Nursery, turn right through the metal five-bar gate into the field, crossing to the stile in the far right corner. Cross the stile into the woods. In one hundred and fifty metres, turn right onto a crossing grassy track.

(In dry conditions, it is possible to continue on the line of the footpath rather than turn right onto this grassy track. The footpath then reaches the rough forest road as below.)
In one hundred and twenty five metres, turn left where the grassy track meets a rough surfaced forest road. (This is a permissive bridle path through Forestry Enterprise woods.) Stay on this rough road for one mile, ignoring all turnings to left and right. At the end of the road, go through gap at side of double gates. (OS ref: 371329)

(The large building in front of you is the former Bluebell public house, now a private residence. Opposite is the site of the former West Hoathly railway station, on the dismantled East Grinstead to Lewes line, now partially restored as the Bluebell Railway. A gateway opposite the former Bluebell pub leads to a crossing of the Bluebell Railway line, with a good view of the northern end of Sharpthorne tunnel to the right. The grass-covered remains of the station platforms are clearly seen.)

On leaving the forest road, turn immediately right on to a rising unmade road (Bluebell Lane), with houses on the left and scrub on the right. Where the unmade road ends, continue on a steeply-rising footpath. Ignore paths to left and right, and stay on the steepest path, keeping the fields on your right. Join the main road at The Intrepid Fox public house (formerly the Vinols Cross Inn), Sharpthorne (OS ref: 368325). (Church Lane opposite leads to West Hoathly heritage village - church, Priest House, pub, post office and shop, etc)

Turn left down the hill of the main road to Sharpthorne village. Sharpthorne Garage on the right (where there is a good shop) is the end of this section of the walk (OS ref: 372324).

A moderate 3-mile walk with no special difficulties. In wet conditions some parts may be muddy. Take care when crossing roads or the railway.

Bus Routes
Check services and times with Metrobus at 01293 449191 or www.metrobus.co.uk

Car Parking
There are no special parking facilities near the start of this walk.