Three Bridges to Crawley Down

The first leg of a continuous walk through the sussex countryside following the Bluebell Railway.

In addition to the delights of a walk through Sussex countryside, this section of The Railway Children walk includes a path running through a disused railway tunnel and the interesting diversion of a church dating back to Saxon times. 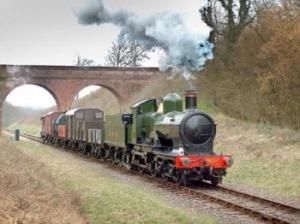 From the front of Three Bridges railway station [London-Brighton line] turn right, pass under the railway bridge and turn immediately right into Station Hill. Walk on the left side of the road. Having passed the houses, and just after the playing fields on the left, turn left up a ramp onto dismantled railway line, with blue sign-post for cycle track 21 to East Grinstead, Worth, Pound Hill. (This was the Three Bridges to East Grinstead railway line.)

Continue along the line of this old railway until the track goes through a short tunnel under a road (Balcombe Road, B2036 - OS ref: 298365). Go through the tunnel and turn right and immediately left, and continue on the track signposted in blue (cycle track 21, to East Grinstead and Worth). The line of the old railway is sunken to your left.

Continue along the line of this old railway until the track goes through a short tunnel under a road (Balcombe Road, B2036 - OS ref: 298365). Go through the tunnel and turn right and immediately left, and continue on the track signposted in blue (cycle track 21, to East Grinstead and Worth). The line of the old railway is sunken to your left.
On reaching the road, turn right and after about 300 metres take the second turning left into Church Road (signed Worth Way). Immediately after Worth Rectory on your left*, turn left and continue along the track (signed Worth Way and cycle track 21 to East Grinstead). At the gates of 'Beaumont' ignore the footpath to the left and continue forward between concrete bollards, on the descending bridleway. A footbridge crosses the M23 motorway.

In about 250 metres, after crossing the motorway, where a farm track merges from the right, keep ahead, with the farm buildings on your right. Where the farm track turns to the left, keep ahead through a gateway onto a bridleway, signposted Worth Way.

On reaching the road (OS ref: 315365) turn left and walk along the surfaced footway. Immediately after the white house (Keeper's Cottage, once the gatekeeper's cottage at a level crossing on the Three Bridges-East Grinstead line) turn right to rejoin the line of the dismantled railway, signposted Worth Way. Continue along Worth Way until the junction with the road (OS ref: 324368). This is the site of Rowfant station, the first on the Three Bridges-East Grinstead line. Keeping the old station buildings on your right, cross the road and continue on Worth Way.

At the site of a demolished bridge, cross the road (which leads to a sawmill to the right) and continue on the Worth Way, until eventually reaching the high arch of a bridge carrying a road (B2028) over the track. (About 200 metres before the arched bridge over Worth Way, ignore the rising footpath on the left, sign-posted to Turners Hill Road.) Pass under the arched bridge and continue on rising track. [Worth Church is forward to your right - a Saxon church, in a beautiful setting]

Go through the gateway ahead of you, continue ahead between fences and join the road, passing houses and eventually shops on the left. At the junction with a crossing road, the route continues forward into Burleigh Way, signposted Worth Way (OS ref: 346375).
This is Crawley Down and the site of the former Grange Road station, the second on the Three Bridges-East Grinstead-Tunbridge Wells line. The public house is the Royal Oak.

This four mile stretch offers no special difficulties, but take care when crossing roads or the railway.

Bus Routes
Check services and times with Metrobus at 01293 449191 or www.metrobus.co.uk