This section of the walk starts from the Coaley Peak Viewpoint on the B4046 road near the village of Nympsfield (GR 793015). The walk takes in the stunning viewpoint of Haresfield Beacon and ends in the beautiful town of Painswisk. 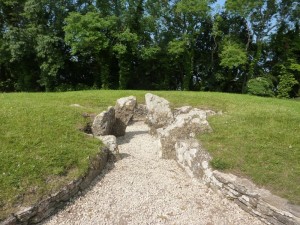 Start from the Coalley Peak Viewpoint on the B4046 road near the village of Nympsfield (GR 793015). The viewpoint has a large car park and the Cotswold Way runs between the car park and the edge of the ridge. Take care when leaving the Coaley Peak site, because there are a number of footpaths leading from the viewpoint. Look out for the COTSWOLD WAY signpost, which is at the north end of the site and fairly close to the road.

Follow the well-marked route through a number of kissing gates and steadily downwards to leave the ridge and turn westwards towards the villages of Middleyard and King Stanley (which are close enough to each other to be virtually one village). On the hill above Middleyard the official route signs offer the alternative of continuing along the higher route across Selsley Common and later turning west again to follow the Stroudwater Canal. The original (main) route goes down into King Stanley and turns left onto the main street of the village, after 200 yards the Cotswold Way passes Kings Stanley Baptist Church (GR 819031) at a bend in the road. Walk down the path beside the church and go through a gate to cross a field. There are three paths leading to 3 gates. You want the left path heading to the top corner of the field. 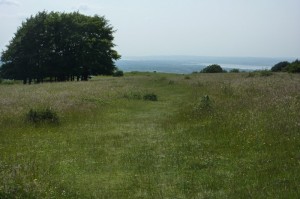 The footpath comes out onto a playing field (GR 813035) where you are presented with paths going left and right, with no signpost! Go to the right to pick up the route again in the corner of the field. The path comes out at a road opposite a large building called Stanley Mill (GR 812042). Turn right onto the road and continue up to the junction with the A419. Cross at traffic lights (GR 813045) then walk a few yards to the left to rejoin the footpath between brick walls. Cross the B4008 road (GR 813047) and turn right to follow the road past the grounds of Wycliffe College. Look out for the Cotswold Way signs pointing through a narrow gap on the left. Walk alongside a playing field then climb the stairs at the corner the field (GR 815048) to cross a footbridge over the railway, then up a few more steps to a field. 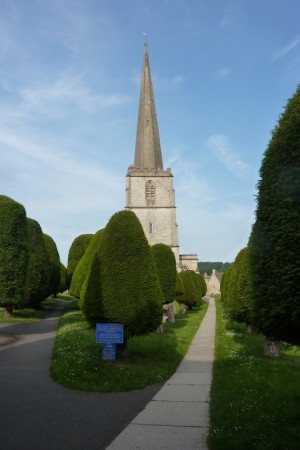 Follow the well-marked route across open fields and through several gates until you reach a road at the village of WESTRIP (GR 821057). Turn right on the road to walk through the village. Resume the Cotswold Way footpath on the left (GR 823058) (look out for signpost and gate). This section of the walk brings you back into view of the Severn Valley.

Cross a road (Ash Lane GR 823065) and follow the Cotswold Way footpath through woodland (path known as Robbers Road). After ½ mile look out for the point where the Cotswold Way path forks left (GR 827071) to continue through the woods following the same ridge (if you come to the road above Randwick you have missed the path and will need to follow the road to resume the path ¾ mile further along).

The path turns left to head out to Haresfield Beacon(GR 831085) – a magnificent viewpoint with wide open heathland and a good point to linger and take in the views. Descending from Haresfield Beacon, the Cotswold Way turns left onto a road for a brief downhill walk before turning right.

The path comes to a road (GR 832094) and, at this point, the signage lets you down. The most obvious path is the broad one exactly opposite. But, in fact, the Cotswold Way turns right to follow the road downhill briefly then turns left (GR 833091) to resume the footpath following the contours below the road. At GR 845092 the path crosses a busy road (watch out for fast traffic) and continues up steps and through a nature reserve.

Cross the road opposite a Pub then turn left into Jenkins Lane (GR 850090). In about 200 yards turn left, across a stile, to resume the footpath (GR 852091). Cross several more stiles and continue until you reach a playing field. At this point the Cotswold Way turns left and runs parallel to the A46 until it reaches Edge Road, where the official route turns right to enter Painswick town, close to the church (GR 866097). Painswick Church is notable for many things, but its most obvious attraction is the churchyard with its lines of well-manicured trees.

There are no rock scrambles and no difficult climbs on this route, which primarily follows well-worn footpaths. However, the Cotswold Way crosses several main roads where care should be taken. The route also involves a few quite steep paths, which can become slippery after wet weather. Some people will find this walk rather long (it can be split into smaller sections). But the Cotswold Way is a long distance footpath and this is just one section.

See other sections of the Cotswold Way - starting with Bath to Tormarton.