Continuing this national route along the Cotswold ridge, this section offers glorious views for little more than average effort. Some sites along the route are popular tourist locations but, for most of the walk, you can enjoy unexpected solitude for such a populous region.

Starting at the Civic Centre Car Park in Wotton-under-Edge (GR 766934) head along the road in the uphill direction (west) out of the town. Notice the prominent blue sign for Cotswold Way. Pass the end of Old London Road (on the right) and ahead notice a footpath on the right leading steeply upward from the road. Go up that footpath following the Cotswold Way signs, then follow the twists and turns of the path all the way up to the Jubilee Clump at the top of the hill, passing through 2 kissing gates, crossing a metalled driveway and climbing several flights of steps on the way. 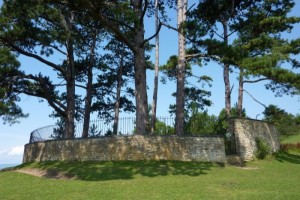 GR 752937 Jubilee Clump. Continue up to the top corner of the open area and pass under the trees to a kissing gate that leads out to a field. Walk along the left hand side of the field until you come to the corner, leading through to Westridge Wood. Cross a junction of footpaths and go into the wood, following the broader of the paths , leading straight ahead. Other paths join from the left but continue straight ahead, following the Cotswold Way signs. At a fork turn (T junction) left to continue through the woods and then continue ahead at the next junction (broader path) (ignore the left fork).

At the next fork still continue ahead, following the Cotswold Way sign. Shortly after there is yet another fork, where the Cotswold Way veers slightly right (almost straight ahead).  At this point you start to pass Brackenbury Ditches on the left (remains of an ancient hill fort).

At another junction the path swings right and at the next junction it swings right again, then left. The, meeting a mass of paths, the way goes through a gateway and out an area of open grassland at the top of a hill. Keeping close to the fence on the left, follow the path along to the Tyndale Monument (GR 744956). 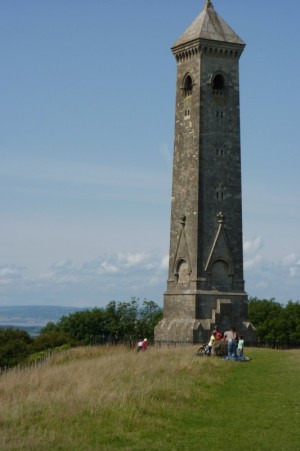 Walk to the right of the Monument and pick up the Cotswold Way signed again pointing down a steep path leading down to the village of North Nibley, passing through a gate and down a lot of steps. At the foot of the hill turn right on a road (B4060) and walk past a telephone box into North Nibley and along towards the Black Horse Inn. Opposite the inn turn left into a road called The Street (GR740959).  At a junction turn right into Lower House Lane, which is a cul-de-sac, following the  Cotswold Way sign. At the end of the road, walk straight ahead to join a footpath leading towards a prominent ridge. Take care as you approach the road (B4060) because cars travel fast round this blind bend. Cross the road and follow a short side road leading to a footpath.

Cross a brook by means of a small bridge. Go past a house called Doverte Cottage and, beside the cottage, notice a container with bottles of chilled water offered for sale to Cotswold Way walkers. Turn left opposite the back yard of the house and go up a steep footpath (signposted Cotswold Way) and go through a kissing gate (GR 741968). Just after the kissing gate, the footpath turns left and leads up to another kissing gate (look back from this point for a good view back to the Tyndale Monument).

Just before the path levels off briefly, at a junction, turn right following a yellow Cotswold Way sign. At the top of the hill break through the trees and come out onto Stinchcombe Hill Golf Club; then follow the signs directly across the golf course. When you come to the car park turn left to walk in front of the club house and towards some trees (GR 747980). The first corner of the club house is at the point where the route returns from an optional loop around Stinchcombe Hill (if you are pushed for time you could miss out the loop by turning right at this point).

Continue ahead to the left of the trees (avoid the private road) and follow the signs to the viewpoints and round the loop of Stinchcombe Hill. From the open area/viewpoint you can see right across the River Severn. Follow the circular route to get the best views. Return eventually to the golf club house and turn left at the end of the building to follow a rough road that goes past a row of very nice houses.  But only go past two of the houses and keep a sharp eye out for a very narrow gap in the box hedge alongside the third house (GR 747980) and turn left through that gap and along a path leading down into woodland (there is also a path on the right, coming in off the golf course, which is dead opposite the narrow path and is rather easier to spot).  Walk steeply downhill through Westfield Wood and into the town of Dursley. If you miss that gap you need to turn left on the next road, which leads down into Dursley.

Come out onto a road and turn left. Follow the road down past the Old Spot Inn. After the Inn, follow the road left into the town centre. Next turn right onto a pedestrian street (GR 755982).  Go past the Corn Exchange (a building on pillars) and cross to the church. Follow the road to the left of the church with the grass-covered summit of Peaked Down visible on the horizon ahead. Continue ahead to “The Priory” (a large cream painted building) and continue straight ahead on a footpath (GR  759983). Just before a sign saying “Private Drive, No Public Right Of Way”, turn left through a metal kissing gate to follow a footpath signposted Cotswold Way.  Go through a gate (or the kissing gate beside it)

The summit of Cam Long Down (GR776994) is a good place to take a break and enjoy the views in all directions.

Follow the marked zigzag path down the hill through woodland from the end of Cam Long Down.  The path leads down to a T-junction of paths, with a stile immediately opposite; cross the stile and walk downhill through a grassy field towards a right-angled bend in a road beside some farm buildings (at the foot of the hill). As the hill levels off, cross a stile and continue ahead down the left hand side of a field.  In the corner of the field turn left and cross a stile and turn right onto a road. Follow the road ahead towards Hodgecombe Farm. Where the road bends right, turn left onto a track (GR 782993). The sign says “drive to Hodgecombe Farm only), but you will soon also see a Cotswold Way sign. Follow the track (which passes alongside a hedge that conceals a pond). Continue ahead along a footpath through the trees. The path is quite steep to start with, but then veers left to follow the contours alongside a high ridge. The path just touches the A4066 at a viewpoint, then turns sharp left to follow the 200 metre contour towards Coalley Peak. (You will walk fairly close the “Hetty Pegler’s Tump” – a chambered grave – but it cannot be seen from this path).  Follow the smaller path that remains roughly on the 200 meter contour line (don’t take the broader downhill path). Go past a barrier and follow the path as it veers right and through a kissing gate.

Pass through another gate/kissing gate and follow the path uphill. Come out again alongside the B4066 and walk alongside the road to a junction and then straight ahead on the side road at that junction, following that road downhill a short way before turning right onto a footpath, following the Cotswold Way sign (“Coalley Peak ¼ mile”).  Go through a gate leading out onto open ground approaching the Coalley Peak viewpoint. Follow the path up round to some steps and a kissing gate and go through that gate. Walk along to the car park (GR794011)

There are no safety issues on the footpath sections (although some places can get muddy at times). But take care when crossing roads - especially around North Nibley where the B4060 (an apparently minor road) often carries quite fast moving traffic.

Jubilee Clump. The stone walled enclosure and group of pines at the top of Wotton Hill is called the Jubilee Clump. It was planted in honour of Queen Victoria at a viewpoint which was also an ancient Beacon site. Trees were planted here in 1815 to commemorate the victory at Waterloo. It had become thin by the end of the Crimean War and was replanted and given an enclosure to celebrate Queen Victoria’s Golden Jubilee in 1887, when this spot was also chosen to house one of a chain of beacons that were lit across the country. The clump was replanted again in 1952. This is also a marvellous viewpoint from which to look back along the Cotswolds and across the River Severn into Wales.

Brackenbury Ditches. This unexcavated Iron Age hill fort is  four acres in size. Although overgrown somewhat, the ramparts , ditches and the entrance at the south end are visible among the trees. Watch out for the ridges and ditches as you pass sections of the remains alongside the footpath.

Tyndale Monument. Erected in 1866, this prominent landmark stands in memory or William Tyndale, who lived early in the 16th century, but whose influence on the familiar texts of English versions of the Bible is still apparent today. He translated most of the Bible from Hebrew and Greek into English but was persecuted for his efforts and was eventually martyred in Belgium in 1536.

Uley Long Barrow. This remnant of an ancient burial chamber is open to the elements and to the public. Not, therefore, as well preserved as other burial chambers in southern England, it is nevertheless a good place to get an idea what these ancient monuments were like. It stands prominently in the middle of the grassland at Coalley Peak viewpoint and picnic site.