A glorious clifftop walk past a historic location and returing to delightful Dale.

This section is a bit up-and-down, but it is short and beautiful. Because you are returning to your start point, you need only carry a day bag. 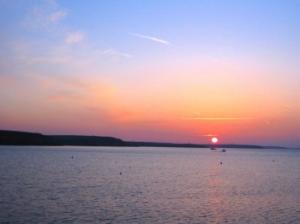 Walk past Dale Yacht Club/Moorings Restaurant and on up the hill (signposted "No Through Road"). Pass Point House and after 350 yards turn right onto a footpath following the Coast Path sign). Over a stone stile, cross a wooden footbridge, over another stile and follow the field edge round to the next stile.

Pass a pool (on the right), cross another stile and follow the cliff path round to the base of a signal tower/beacon light at Watwick Point. Go over two cattle grids/stiles and round the cliff top above Watwick Bay (sandy beach). About 200 yards after the second cattle grid fork left over a stile, following the Coast Path sign.

Just past the next Coast Path sign a path forks left to go down to the beach, so take the right fork to continue on the Coast Path. Cross two stiles and head towards the coastguard tower (plus 3 beacon towers) at West Blockhouse Point. The path goes past the base of the third of three signal/beacon towers.

Over a stile, then another stile into a field and along the field edge to another stile. Go down the hill, over a stile and over a footbridge crossing two streams. You are now at Mill Bay, where Henry Tudor landed on 7th August 1485 on his way to defeat Richard III at the Battle of Bosworth and to become King Henry VII. His fleet of 55 ships docked at Dale. Go up the hill and pass a memorial stone recording the historic events of 1482. Cross a stile through a wall near some buildings and walk between a wall and a wire fence towards a gate. Follow the same line across the grass to a fence behind a row of white houses. Turn right and follow the fence round to a gate. Turn right and walk along a metalled road past holiday cottages. At the end of the St Anns Head complex of buildings turn left through a gate back onto the Coast Path proper. The island of Skokholm now comes into view and shortly you will also see Skomer, closer to the shore and to the right. 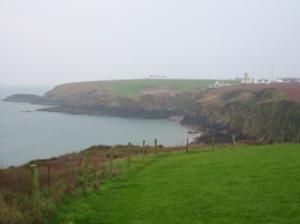 Go through a gate into the National Trust reserve of Kete (a footpath on the right leads to the NT car park). In clear conditions it will now be possible to see the hump of Grassholm Island appearing from behind Skokholm (to the right). Another stile/footpath to the right leads to the NT car park and confirms that you are approaching Short Point. Go through a gate, past the rocky headland of Long Point. Pass a National Trust sign marking the end of their Kete reserve. You should now be able to see Gateholm Island close to the mainland in front of Skomer.

Cross a stile and walk along a field edge. At this point a glance to the right will reveal the bay/inlet at Dale Roads (from where you started the walk). Cross two stiles, passing the small headlands of Iron Point and Great Castle Point. The next stile brings you to an overlook down to the sandy beach of Westdale Bay. (If you want to complete the walk in just 3-days continue ahead from this point. See day 3.)

Go down the steps and turn right over a stone stile and walk towards the village of Dale. Cross a concrete and steel stile onto a lane behind Dale Castle. Rejoin the road and walk down into the village.

Nowhere is this a particularly difficult walk, but walkers may choose to take it steadily over 4 days or step out for the 3 day version. The overall distance is 33 1/2 miles made up of -
Broad Haven - Dale - 10 miles
Dale circular walk - 7 miles
Dale to Marloes - 7 1/2 miles
Marloes to Broad Haven - 9 miles 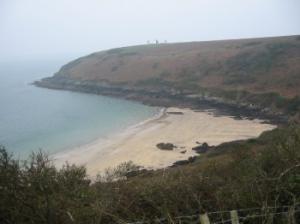 Dale is a small village, but the largest community in this peninsula and the focus of much of the local activity and organisation. It is situated at the head of quite a large inlet, bounded by cliffs, and is a centre for local boating/sailing/windsurfing activity. Its great moment in history was the arrival in 1485 of 55 ships bearing the army, which was to defeat Richard III at Bosworth and put Henry Tudor on the throne of England.

Mill Bay - The actual place where Henry Tudor landed on 7th August 1485 on his way to defeat Richard III at the Battle of Bosworth and to become King Henry VII. His army was simultaneously arriving in Dale Roads in a fleet of 55 ships that docked at Dale. A memorial stone above the bay records this turning point in the history of Britain.

Skomer - its Danish name betrays the Viking interest in this area. But the seafarers who land on Skomer these days have usually travelled just 10 minutes by boat from Martin Haven (near Marloes) and have come to see the wildlife. The island hosts puffins, guillemot, razorbills, manx shearwater (Skomer hosts one third of the world population of this seabird) and a host of more common birds, plus grey seals, its own unique vole and (offshore) porpoises, sunfish and turtles.