A continous clifftop walk with views of Chesil Bank and the Dorset coast.

Portland has a unique landscape created from a block of very special stone (many of our best public buildings are faced with Portland stone). Known as an island, Portland is actually linked to the mainland by Chesil Bank and overlooks a harbour that has been strategically important for centuries and will assume a new importance when the 2012 Olympic Games uses it for the sailing events. This walk starts from a car park overlooking the harbour and does a complete circuit of the sland.

Start near the war memorial overlooking Portland Harbour (GR789730) where a signpost points in both directions to "Round Island Walk" but note that the signposting is not consistent and this name rarely appears again (most signs say "coast path", some say "coastal path"). Walk along the road, past the car parking areas and on to where the road sweeps right, just in front of a metal fence overlooking a deep defensive ditch (GR694734) Follow the road beside a wire fence then, at the end of the fence, turn left onto a footpath (GR695732) towards the sea. Signposting is poor at this point but it is worth continuing to the cliff-top to enjoy the view, then turn right (GR697733) and walk through a rough stone wall, move in the general direction of the buildings you can see on the next rise, and work your way round a maze of paths (GR697732) to reach the road that leads to those buildings.

Follow the road to The Verne (GR700727), a young offenders' prison, and walk round the left of the building to follow the road along the cliff top. Looking over the cliff you may catch a glimpse of primitive English goats that have been released to wander wild in the area as a means of combating the over-prolific growth of cotoneaster plants that have become a problem in the area. Where the road turns right round the prison continue straight ahead, past the Portland Borstal Officers' Club (GR704723) and follow the footpath behind some houses. Continue ahead on the coast path and through a gate (GR703719).

A milestone to points the way to Ope Cove(GR700714) taking your route left and down a cliff path. Follow the path down to Church Ope Cove and past the first beach hut. [The more prominent path leads down to the beach, which is a pleasant diversion, but the narrower path is the coast path and continues ahead and back up the cliff.] Follow the path up to a jumbled pile of stones then right up some steps (GR696702). [Several small paths lead left to viewpoints.] The main path then veers sharply to the right and zigags up to the top of the cliff, where it joins a road. Follow the path past Cheyne Weares viewpoint and car park (GR693705). Pass Coombfield Quarry, a working quarry that is sometimes open to visitors and, about 50 yards further ahead, turn left off the road to resume the coast path (GR691703). Peregrine falcons sometimes nest on the cliffs at this point, so it is worth pausing for a look through binoculars before proceeding.

On the approach to Portland Bill, and before you get to the beach huts, the cliff path passes over some large caves (GR685690). 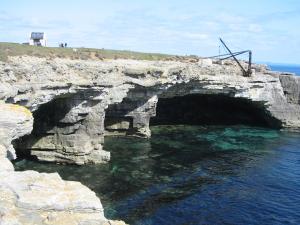 You can't see the caves from the path, but a few steps to the edge of one of the rocky shelves brings you to a vantage point from where you can look down to the cave entrances in the cliff face below. Walk past a jumble of beach huts to reach Portland Bill (GR677685).

Walk past the car park and up the grassy hill towards the prominent Coast Watch Station [lookout tower] (GR677692). Pass to the left of the lookout tower and ahead along the cliffs, where you can start to see views of Chesil Bank and the Dorset coast. Follow the footpath close to the cliff edge, then gradually move to the right to join a wider path that runs alongside a fence. The mileposts offer options to follow the coast path across to the other side of the island (i.e. where you have been already) but continue ahead alongside the cliff towards a mobile phone mast and the village of Weston.

At another milepost (GR680709) continue ahead towards (Chiswell 1¾ miles). A former gun emplacement provides a marvellous viewpoint towards Chesil Bank (GR679717). At a junction where a sign points to East Cliff ignore that direction and continue ahead (GR683723). [Pause briefly and look at the cliffs to your right to see examples of creative amateur stone carvings] At a milepost offering a route right to Tout Quarry (GR686729) look ahead and notice the War Memorial on the hill where you started the walk; continue ahead towards the War Memorial. At the next junction turn right towards New Ground and East Cliff. Cross the road and continue up the track opposite that leads to a narrow road; turn right onto that road and follow it up to the War Memorial and past The Heights to return to the car park.

Although it includes some relatively steep climbs, the only challenge this walk presents to anyone with normal fitness is the seven miles overall length. 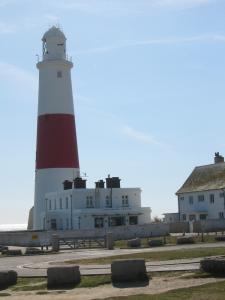 Church Ope Cove is really the only beach on the island. It is a tiny cove with a pebble beach and surrounded by typical Portland style, privately owned beach huts that nestle beneath the cliffs. During the first half of the 20th century it was a popular resort, attracting crowds of visitors landing by paddle steamer. A notable museum I situated near the clifftops above the cove.

High Angle Battery - You pass this derelict nineteenth century fort in the early part of the walk. It was built as part of Britain's Coastal Defences  close to the Verne Citadel. Being down in a quarry the guns were hidden from enemy ships and the "high angle" at which the guns fired their shells ensured that they cleared the ramparts of the battery and dropped onto the less protected upper decks of the enemy ships. The Battery was overtaken by new technology and was actually only in use for six years. 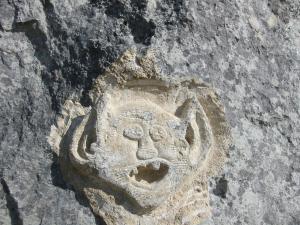 Portland Bill has a lighthouse with a visitor centre, toilets, a cafeteria, a large car park and wide grassy areas with seats. The signs indicate that porpoises guillemots, peregrine falcons, bottle-nosed dolphins and basking sharks have all been viewed from this area. In particular it is noted for the numbers of migrant birds that pass this way in spring, because this is one of the first landfalls on their journey from warmer southern lands.

Stone carvings - at some parts of the island, especially near the end of your cliff walk, some of the cliffs are used by creative amateurs to practise their stone carving. Using traditional masons' tools, they provide unusual entertainment if you are lucky enough to see some of them in action.