A varied walk in beatiful scenery, including the two highest peaks in South Wales.

The scenery is memorable with glorious views in all directions and delightful stream-side walks, stunning cliffs and ridges a cwm complete with tarn, and a heart rending story remembered in stone. 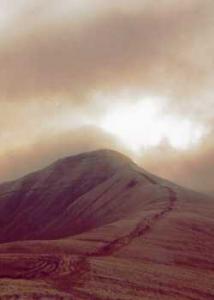 (GR006244) From the Car Park at Nant Cwm Llwch follow road back for about ¼ mile. Turn right at the cross-roads (East) and cross a bridge over small stream. Follow the road round to the right for 1 mile. 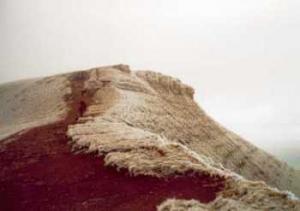 Turn in to Cwm Gedi Car Park (GR023247). Cross a stile at top of the Car Park and start following the footpath and sheep tracks SSW and up the right hand side of the V shaped valley ahead (the peak on the left is Allt Dhu).

(GR027243) At top turn SSW (right) along ridge towards Pen y Fan. Some parts are poorly marked and the ridge is strewn with shallow pits and piles of rough stone.

The route joins a well marked footpath along the ridge (Cefn Cwm Llwch) towards Pen y Fan where the eventual summit climb is a steep rock scramble.

(GR012216) Summit of Pen y Fan. Drink in the view (weather permitting) then continue WSW across pass on stone-paved path to Corn Du. (GR007214) Summit of Corn Du. Go over the NNW edge and follow steep rock-paved path alongside the cliff edge overlooking Cwm Llwch. (000218) Pass Tommy Jones' obelisk then turn right (NNW) on path down to the tarn. Continue down, initially parallel to stream, then towards trees. 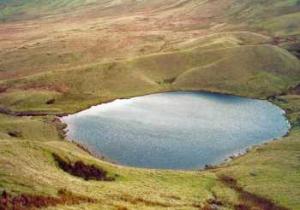 Cross 2 stiles to pass behind farm buildings then rejoin track. Cross stile, wooden bridge and ford following wide path through woods and back to the Car Park.

This is only about a 6½ mile walk, but involves steep sections and short scrambles. The weather can quickly turn nasty and it is important to wear good boots and suitable clothing. 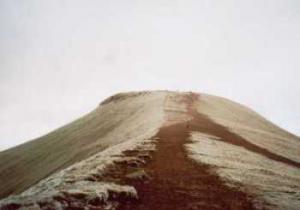 Nant Cwm Llwch is a camping area, car park and popular starting point for Brecon Beacons walks. The site itself is pretty, surrounded by trees, bounded by a tumbling stream and offering views of Corn Du and Cwm Llwch.

Geology - This area, owned and managed by the National Trust, is formed of Old Red Sandstone, shaped by glaciation.

Pen y Fan (896 metres / 2939 feet) is the highest mountain in the Brecon Beacons and, in fact, in the whole of South Wales. The summit is marked by a cairn.

Corn Du (873 metres / 2864 feet) -  Although smaller than Pen y Fan and closely joined, this mountain is strikingly attractive in its own right. Where Cwm Llwch is scooped out of its side it is left with a sharp cliff which almost overhangs.

Tommy Jones' obelisk - The inscription on the obelisk reads, "This obelisk marks the spot where the body of Tommy Jones, aged 5, was found. He lost his way between Cwm Llwch farm and the Login on the night of August 4th 1900. After an anxious search of 29 days his remains were discovered on September 1st. Erected by voluntary subscription."

Llyn Cwm Llwch is a near-circular tarn in the classic bowl-shaped cirque of Cwm Llwch. A cwm (or cirque) is a glacial feature - plucked out of the mountainside by an ice tributary of the main glacier.