Alternative route to see these four impressive waterfalls - starting with one where the path passes behind the cascade.

Most people have not heard of the rivers Hepste and Mellte so will be greatly surprised to see their impressive waterfalls. 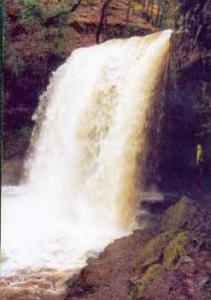 The footpath passes through a gate beside a farm entrance. Pass some striking rock formations (inclined strata). Where a side path leads right you should continue straight ahead on the way-marked path following the white arrows. In the distance on the right you can see the twin peaks of Pen y Fan and Corn Du.

Where the path forks take the right-hand one following the fence, to comes out into an open area of heathland. Go straight across, cross the stile and follow the white arrow left, up the hill to another stile. Take the right hand path, still following the white arrows. Follow the fence to another stile and continue straight ahead (the original path has been deliberately diverted for conservation reasons). Pass by conifer woodland, dropping down into the valley toward the forest. 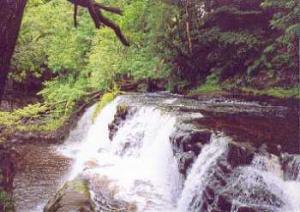 Three large rocks and a signpost mark the right turn towards . Go down the path to Sgwd yr Eira (you will hear the roar of the waterfall). The path descends steeply down high steps and rough stones to the falls (Map Ref. 929100). Cross the river on the path behind the cascade

Follow the river bank a few yards downstream (over the rocks) until the path begins to zigzag up the bank (with handrail). At the top where the signpost points right to Gwaun Hepste (Car Park) and left to Sgwd y Pannwr take the left route. A few yards further along on the left a viewpoint allows you to look back to the falls. Another signpost points to Gwaun Hepste and back to Sgwd Yr Eira with an alternative path to Sgwd y Pannwr. Notice the gorge cliffs on the left. Turn left at a sign to view the falls at Sgwd yr Pannwr (Map Ref. 923103).

After feasting your eyes on this Niagara-like waterfall, follow a rough path upstream to Sgwd Isaf Clwn-gwyn (Map Ref. 923109) initially a flight of three rapids then a thundering waterfall staircase. This path is a dead end and you need to return by the same route and back up to the junction where earlier you turned off to Sgwd y Pannwr. 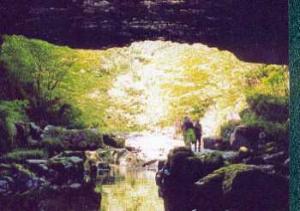 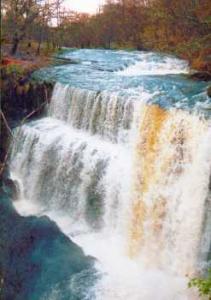 At the top, turn left and follow the obvious path through the woods to the next waterfall. Sgwd Clwn-gwyn is clearly signposted, but the signs are hardly necessary with the sound of the cacade announcing the route. Return to the path after viewing the falls and continue in the same direction. The path goes downhill, crosses two tributary streams and reaches a footbridge over the river Mellte (if time allows, you can cross and walk back to view Sgwd Clwn-gwyn from the other side). f the falls to follow. Continue on the same footpath past the footbridge. The footpath follows the river closely for a further ½ mile when the river disappears from sight (it then flows underground)

After a further ¼ mile the path turns right beside a potholers' access hole and comes out at a small road. Cross the road to the Cavers Car Park (Map Ref. 929124). Access to the Cave is via a path leading down from the Car Park. Finally, return to Penderyn via the same main path.

The risk of slipping as you walk behind Swg y Eira falls is obvious, but other parts of this walk can become slippery or muddy after bad weather. Otherwise, this is a fairly easy low-level walk.

This walk can be varied by starting from the Cavers Car Park near Ystradfellte.