Starting and ending near Stanton Drew stone circle, this walk follows an easy route alongside the River Chew.

The river Chew is small and little known, but has shaped this region of Somerset, just north of the Mendips, into a smoothly sculptured, broad valley. Some parts of this walk are simply 'pretty'. The walk begins and ends close to a large, prehistoric Stone Circle. 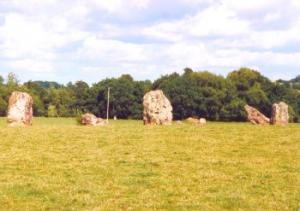 The footpath begins at the kissing gate on the corner where the road to the Stone Circle turns off from the road to the church. Cross into the field and head towards the opposite corner, next to some farm buildings. Cross the stile and notice the Stone Circle on your left as you cross the field to the next stile. In the next field veer slightly left towards another stile. Head towards the telegraph pole then on the same line to the stile on the other side of the field. Cross that field, noticing the village of Upper Stanton Drew up on your right. Go through a large gap in the fence and continue straight ahead across the next field. 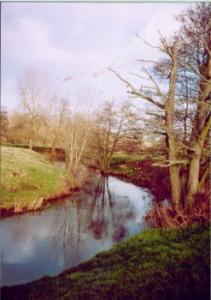 Cross a small road to pick up the footpath running inside the field next to the hedge and parallel to the road. Come back out onto the road and re-cross to another stile. Veer slightly left and cross a field to the next gate and stile. Head down towards the River Chew and follow the most appropriate path roughly parallel to the river (the ground can be soft and wet, so you need to chose the best path for the season!)

After the next gate pr stile the river loops left away from the path, but you need to continue straight ahead to re-meet the river as it loops back. Pass the bridge and weir at Byemills.

Cross a stile and head down a short lane beside a wall, past a cottage and through a kissing gate, still following the approximate line of the river. At the corner of the next field go through a kissing gate next to a bend in the river. The gate bears a sign for Knowle Angling Club. Walk up a slope between a barbed wire fence and some trees to another kissing gate. Follow the path across a field towards a large viaduct.

Cross a small wooden footbridge/stile over a ditch and veer slightly left. Go under the viaduct, past a w 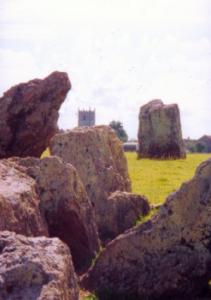 eir and slightly right to pass through a gate and onto a back road in the village of Pensford. Turn left and walk down to a cottage called Bridge House. Turn left and cross the bridge. Notice a stone cottage bearing a sign showing the flood level in July 1968 (above head height!). Take the road/path beside this cottage, leading up towards the viaduct.

Go through a gate into Calvery Woods and follow the path straight ahead. Where the path forks right cross the stile straight ahead into a field and continue alongside the river. Cross to a gate and continue straight ahead. Veer right, cross a field to a ridge and pass through a kissing gate. Two paths lead off from this point, but keep left, following the field edge and head toward another kissing gate in the left hand corner of the field. Cross another field to yet another kissing gate and turn left onto a road, then walk down between houses to Byemills Farm. Cross the weir and begin to retrace your outward route from this point turning right on the other side of the river.

Re-cross the road and follow the footpath heading towards a church tower. Go through a large gap in the fence and follow the right hand field edge round until you come to another stile. Veer right, heading towards a telegraph pole, cross another stile and follow a farm track up towards the church (notice the Stone Circle on the right again). Cross a stile beside farm buildings and walk along the farm road to a stile leading beck onto the road near the church in Stanton Drew. Walk back to whichever car park you started from.

This walk is on relatively level ground with no major roads and the biggest problem being the likelihood of muddy patches near the river.

Stone Circle - The Stanton Drew stone circles are in the care of English Heritage but lie on private land, accessible on payment of a £1.00 entrance fee to be dropped into an "honesty box".
Being little known, you might expect this prehistoric monument to be insignificant, but you would be wrong. This is an impressive feature, with three circles including some quite large stones. The Great Circle is one of the largest in the country. The first plan of Stanton Drew stone circles was published in 1776 and they have changed little since then.
Recent scientific studies showed that the Stanton Drew site is the ruin of a much more elaborate and important site, with the remains of an elaborate pattern of pits revealed through magnetic surveys. The Great Circle lies within a large buried enclosure ditch measuring about 135m in diameter, making these circles the largest and most numerous yet recorded at any site.

The Cove - In the garden of the village pub is a group of three large stones called The Cove once, undoubtedly, part of the same complex as the larger stone circles. These stones can be accessed from the car park behind the pub.

Hautville's Quoit is another standing stone lying to the north, across the river Chew.

Pensford is a ribbon village lying alongside the A37 road. However, it has a long history and sits a strikingly beautiful point in the Chew Valley. The viaduct is high and impressive and the church lies on a strip of land that is almost an island.

Stanton Drew - despite some modern development, Stanton Drew is very much a country village with active farming and a traditional community.

River Chew - This river may be small, but it has created a strikingly beautiful valley with a character and community of its own. The Chew Valley contains a number of villages and small towns that 'feel' related within the valley. Further upstream is a large reservoir (Chew Valley Lake) which supports sailing, fishing, bird-watching and other leisure activities.