A fascinating walk through classic limestone scenery, with rivers that do the stangest things!

For a condensed lesson in the features of limestone scenery you could hardly do better than follow this walk. The woodland sections provide a tapestry of light, shade and colour to the accompaniment of bird song and rushing water. Then, unexpectedly, the rushing sound fades as the river disappears. 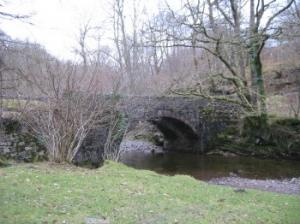 Leave the Pont Melin Fach car park (GR 908105), cross the bridge and go over a stile on the left to follow the footpath northwards alongside the River Nedd. After a short way the path drops to the level of the river and passes under a cliff. After the cliff the path branches (GR 908106); follow the right fork up the hill through the trees (in some conditions this path may seem more like a stream!). [Don't be tempted by the alternative path as it soon becomes impassable].

After passing above gorges the path drops back down to river level and then up to stile (GR 911109). Notice quite a high waterfall running down the opposite bank. Cross a rocky stream tumbling in from the right and pick up the path alongside the river. After a short way cross another stream and continue ahead. Cross a stile at GR 913114 then go over several rivulets. Another path joins from the right and there is a wooden signpost to Pont Rhyd Y Cnau (which actually refers to the bridge you can see ahead). The bridge (which has a gate) is at GR 913116; do not cross the bridge, but continue ahead on the footpath following the river. 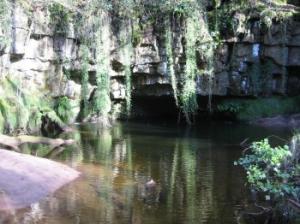 Cross another stile at GR 913120. Arrive at Pwll Du, a fascinating feature created by the first of today's "vanishing streams"; the almost circular pool is surrounded by a cliff; at the back of the pool, a stream flows from a subterraneous passage, having dropped through a sink hole higher up its course. Just after Pwll Du the river veers right around a high promontory; in dry conditions it is just possible to clamber round at river level, but normally it is necessary to clamber up to the top to cross behind this crag and then return to river level after the bend. Take care - there is no clear path to follow.After resuming the riverside path continue to follow it upstream. After a short distance, the sound of rushing water that has accompanied your walk so far begins to fade into near-silence as the river disappears under its dry rocky bed (this may be less obvious at times of high water levels). Actually, it is not disappearing, but reappearing, having dropped into a sink hole higher upstream. In average conditions this resurgence occurs at GR 912123. 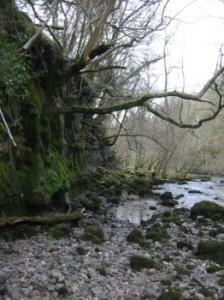 Soon after this, as you approach another crag, veer to the right and away from the river to cross above and behind the cliff and then walk alongside a fence. Cross a stile to go over the fence (GR 912125) and join a stony track that comes in diagonally from the right and follow it down to the left to cross a bridge (GR 912127). Continue ahead and slightly right, going past a derelict stone building and uphill to a gate and into a grassy field.

Continue ahead across the field and then follow the path for some distance alongside sparse woodland and then more open field. Go through a gate at GR 910135 and continue ahead to another gate (GR 910136). Pass through a gateway on the left at GR 910138 and cross the field towards conifer woodland. Turn right onto a track alongside the conifer woodland (this is actually an old Roman road called Sarn Helen). Reach a gate leading into an open area; another gate ahead leads to a continuation of the Sarn Helen track, but do not go that way. Turn to follow the narrower of the two paths on the right and walk across a field to a gate in the right hand corner. Cross down to another gate and join a track that leads down to another track near the river. Turn left onto that track (GR 911139) and follow the river upstream to a bridge (Pont Wan GR911140).

At this point a short diversion brings you to the other side of the "vanishing stream" story. Cross the bridge and turn right to go over a stile. Pass a cave on the left and go over a stile on the right to walk downstream to a cliff, under which the river descends into its underground passage, at Pwl-y-Rhyd, later to emerge from the stony river bed you passed earlier. Retrace your steps back to the stile beside the bridge. 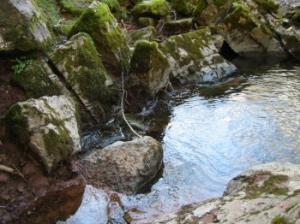 Turn right to follow the track uphill to a road junction (GR 912140) and turn left onto a road (a sign says "No Through Road"). Follow the road up to the brow of the hill where you go over a stile on the right onto a footpath signposted to Ystraddfellte. Cross the field diagonally to the right where you will find a small gate behind a hawthorn tree. Go through the gate and continue uphill towards a line of trees. Go through another gate at GR 914140 and continue ahead in the direction of the largest of several limestone crags. Go through a gate and veer slightly to the right of the crag, passing through an area of shake holes. Go through another gate at GR 917139 and follow the path to the right towards, and then alongside, a stone wall. 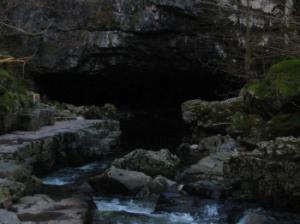 Go through another gate (GR 918139) and follow the faint path veering to the right between more shake holes. Turn right onto a path/track that is said to have been an ancient drover's road, go through a gate and continue along the track towards a row of pine trees. Go through a gate beside the pine trees (GR 923131) and follow the track down to a road. Follow that road down to a gateway, cross a larger road and continue down the small road opposite (GR 927128) leading down into the valley. That road leads to the popular "cavers' car park" at Cwm Porth (Porth yr Ogof). With toilets, a shop and picnic tables, this car park is a good place to take a break. However, it is also the location of another vanishing stream. In this case the River Mellte flows into the mouth of a huge cave, which can be reached via a path that leads down from the car park behind an information sign. 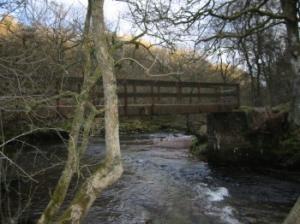 Cross the road from the car park and follow the signs to the "The Waterfalls", taking a path down the eastern side of the river. The re-emergence of the river is hidden from this path, but notice how the sound of rushing water returns after a short distance. The path comes out onto a grassy meadow then continues alongside the river. Cross a small side stream and from here the path gets narrower and more winding as it climbs up (where the river runs into a gorge). Go through a kissing gate and across a tiny stream after which the path drops back down towards the river. Cross another small stream and go through another kissing gate (GR 925113). The path widens out again, crossing a grassy section, as you approach a wooden bridge. Cross the bridge (GR 925111) and follow the riverside path down to the impressive waterfall of Sgwd Clun-gwyn. Walk up some steps to rejoin the main path, which gradually moves away from the river. 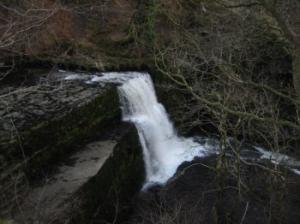 Follow the path past some farm buildings and through a kissing gate (GR 921107) past a National Parks information board and map and through another gate, then up to a road. Turn right onto the road and go over a cattle grid. Pass a garage, shop and telephone box and come to a white chapel building on the right. Cross a stile on the left, opposite the chapel, signposted to Heol Fawr (GR 918109). Head across the field, slightly towards the right of the thicker bunch of trees opposite and go over a stile. Follow a grass track, go through a gate and turn left onto a farm road (GR 917110).

Pass Heol Fawr Farm (where the road runs out) and continue ahead on a track, which soon doglegs sharp right and sharp left and then leads to a gate. Go through the gate, following the yellow arrow, and continue to follow the path as it gets narrower and passes between grassy banks. Go over a stile beside a gate, pass some farm buildings (Glyn-mercher-uchaf Farm) and out to a road, where our route turns left. Turn right at the junction (next to a stream at GR 912106) and walk downhill alongside the stream and eventually cross the bridge at Pont Melin Fach and turn left back into the car park.

This walk is relatively level (mostly near the 800 ft contour) but includes some scrambles (especially when the river level is high and you have to climb to the top of the bank). It is not particularly difficult in terms of effort and fitness, but it does require care and good footwear.

Porth yr Ogol - The large Car Park on this spot is a popular gathering point for cavers and is well provided with toilets, a shop and picnic tables. A short walk down steps and a rough slope takes you to the fscinating scene of a river flowing into a large cave and disappearing into the darkness. You may see teams of potholers and cavers gointo into the cave, but it is not wise to follow them unless you are with a properly trained and equipped caving team.

Pwll Du - The stream that emerges from underground at Pwll Du is such a minor tributory that the Afon Nedd scarcely notices its arrival. But the almost circular bay that this little stream has created is a wonderful tribute to the power of water. Definitely a sight worth stopping for.

Pwll-y-rhyd - The river Afon Nedd disappears underground at this point only to re-emerge from its gravel bed further downstream (earlier in this walk). In some conditions this vanishing trick happens quite calmly, but at other times is becomes an impressive torrent.

Resurgence is the name applied to the point where an underground stream re-emerges as surface water.

Shake Holes occur often in limestone country and look like random depressions in the ground (sometimes almost cone/funnel shaped). They are points where water seeps into underground systems, gradually dissolving the limestone. Where a stream flows into them they turn into Sink Holes.

Sink Holes are the points where flowing water (river or stream) suddenly disappears into underground systems. They are common features of limestone country and may be almost uneventful points of change or they may be dramatic waterfalls plunging into the darkness below.