Spacious vistas, a sobering memorial and a lovely walk beside river and waterfalls make this a memorable walk.

Britain has larger and more dramatic waterfalls, but seldom can you see so many falls in such a small area. Talybont is a classic "hanging valley" where water cascades into a glacial valley occupied by the largest reservoir in the Brecon Beacons.

The area abounds in bird life in woodland, meadow, stream and hilltop. But, if there were no waterfalls and few birds, this walk would still be memorable for its unique memorial next to the actual remains of a World War II plane. 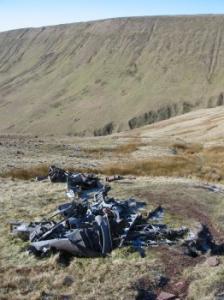 Walk back to the Car Park entrance and turn right to follow the path steeply uphill beside a fence and alongside a waterfall (the first of many on this walk). Walk towards the apparent summit ahead/right, which is the headland of the Craig Fan Du ridge. The path along the ridge is not clear at first but follow its line, moving towards the right hand side of the ridge until you pick up the path proper, which runs along the edge of a cliff. Some sections are marked with cairns and the ridge gradually narrows.

Cross a river/waterfall (050192) and move to the right, gradually heading towards the head of the pass and across to the opposite ridge on the right (057205). Avoid the first path that leads right down into the valley, but continue along the side of the ridge until you reach the war memorial and the wreck of the plane/crash site [Wellington bomber, July 1942, 5 Canadians]. 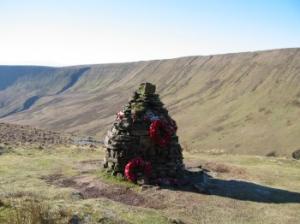 There is no proper path from this point (although several sheep tracks look like paths) Your options are to follow the side of the ridge and follow it to the end (headland), then turn right down into the valley, following the stream; alternatively you can back-track on the path by which you came down from the head of the valley, than turn down to follow the stream along the valley bottom. (NB on either route, pick your way carefully and watch out for boggy ground)

Once you reach the stream (by either route) pick up a footpath the runs parallel to it (downstream) towards woodland. The path runs through woodland, past several waterfalls, and reaches a stile right beside the river. Continue following the path parallel to the river until you reach a wooden footbridge (060187). Turn right, over the footbridge and follow the path up into woodland.

Follow the footpath alongside a stone wall (on the right) until you reach a stream and a cascade of waterfalls. Turn right to follow a steep path roughly parallel to the waterfalls. The path can be hard to find at times where trees have fallen across it and undergrowth is beginning to obliterate it. Higher up, the path becomes clearer and actually crosses the river at the head of a waterfall (left) then leads back up towards the road and the car park.

At the edge of the woodland keep inside the fence and follow the path round to the right until it crosses the steam to join a short track that leads up into the car park.

With so much water around you may expect some parts of this walk to be slippery and the first section of the walk is quite steep. Good walking boots are essential. The distance is a little over 8 miles. The ridges are exposed and may be dangerous in stormy weather.

Talybont on Usk - A small village lying alongside the Monmouthshire and Brecon canal and close to the river Usk. It is an ideal point from which to enjoy the canal-side walk. The Talybont reservoir is nearby.

Talybont Reservoir - The largest man-made lake in the Brecon Beacons, this long reservoir is a haven for wildfowl. It fills the centre of what once was the valley of a major glacier.

Memorial - The crash of a Wellington bomber in these hills in late July 1942 was a tragic event. Five young Canadians lost their lives when they were almost safe home at base and at a time of year when visibility is rarely a problem. But they failed by several feet to mount the hilltop and smashed into the valley side leaving wreckage, which can still be seen strewn along the ridge, marked by a memorial cairn.

Hanging valley - The waterfalls and rapids on this walk owe their existence to a feature known as a hanging valley. Streams flow down what was once the valley of a tributary glacier. Where they meet the valley of the more deeply cut main glacial valley they plunge over the edge that the retreating glacier left hanging.