Taking the tougher route first, this walk takes you to the highest point in Wales then gently down to Llanberis for rest and refreshment.

Snowdon manages a combination missing in many mountains: it is pretty as well as high. This walk combines two of the classic routes, starting with the more challenging and saving the gentler path for the return route. 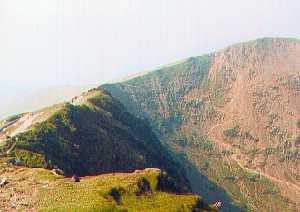 Start at the corner of the Car Park by the cafe leading up the slope onto the mountain (the Pyg Track). Avoid the Miners Track (the road leading from the lower end of the Car Park) take the track that starts behind the Visitor Centre. The Pyg track climbs steadily across a hillside towards an obvious pass ahead.After exactly a mile, the path turns left and heads up to crest the ridge.

After crossing the ridge you reach the pass (634553) where the ground obviously falls away and the Snowdon comes into view.
Avoid the right turn (which leads to Crib Goch) and stay on the cinder path, which climbs gradually up the side of the mountain. The peak opposite is Lliwedd, and the lakes of Llyn Llydaw and Glaslyn are below.

The Miners Path (which you avoided at the start) joins just as the route begins a steep climb towards the summit ascent. Their path has headed round the base of the hill yoou have been climing steadily - but they get their tough climb all in one go!

The path gets rougher and begins to climb steeply towards the rim of the valley ahead. Near some mines it divides into several routes, but keep to the right (following the cairns) to avoid the mine workings. You now approach the zigzags. When you break out onto the skyline (608549) you begin the gradual final ascent, following the mountain railway to the summit (610544).

Return from the summit via the Ranger Path (647557).
Start by retracing the route, following the railway to a large stone set vertically into the ground a few hundred yards past the point where you came up the zigzags onto the plateau. Follow the path that passes above and to the East of the railway, ensuring you are making a steady descent to the North.

As mountain climbs go this is relatively safe, but fatal accidents do happen on Snowdon and this route includes some steep and possibly slippery sections. The climb is steady and sometimes relentless, but not excessively steep. Some sections pass close to cliff edges - so wear proper walking boots and take care.

Snowdon manages a combination missing in many mountains: it is attractive as well as high. It is the highest mountain in England and Wales and the second highest in the classic "three peaks challenge" walks. But that does not qualify any claim to be the second highest mountain in Britain... Scotland has a number of peaks that rise higher than Snowdon.

Llanberis - This small town owes much of its prosperity to the closeness of the famous peak, and is is well provided with hotels, pubs, restaurants and shops for buying outdoor gear. It also has the terminus for the Snowdon Mountain Railway... a handy opportunity for family walkers to send the younger children to meet "Dad" at the top.

Snowdon Mountain Railway - modern planning laws and attitudes would not allow this railway to be built in such an important site of outstanding natural beauty; but age has turned this remarkable feat of engineering into a revered feature of Snowdonia. The return route on this walk crosses the railway several times and you are sure to see the trains. If your children ride the railway you could have the unusual pleasure of being greeted by your family at the summit of a challenging walk.