Touching and crossing the Cotswold Way, this walk puts you in touch with the beauty of these Gloucestershire hills.

For the most part the scenery of the Cotswolds is pretty, rather than dramatic, but this walk includes some striking views. It is a pleasant walk on which to sample the variety of this lovely region.

Walk alongside the road in the Dursley/Uley direction. At Bownhill Farm, just before the cattle grid on the main road, turn left onto a footpath signposted to Woodchester. Cross stile (marked with a yellow arrow). Walk along the left hand edge of the field. Pass a small conifer plantation, and then walk alongside Dingle Wood. Through a kissing gate and continue along the left hand side of the next field.

Go through a second and third kissing gate, still keeping on the left hand side of the field. Cross a stile onto a track that runs in a depression between the trees.

Past Bownhill Farm house and buildings and follow the track downhill. Over a stile beside a gate, where track becomes wide enough for farm vehicles. When track splits (among birch trees) take the left fork. Descends into the valley and cross a stile beside a gate to a small road. Take the narrow footpath that turns left immediately after a house called "Wingletang". Cross a stile and head across the field, aiming a little to the left of the church spire. As you go over a ridge notice the next gate on the other side of the field. Go over the stile and cross the lane to a stile leading into parkland.

Go down steps and cross to another stile (towards church). Pass a large tree, cross a wooden bridge over a stream and go up hill, over a stile to an enclosure surrounded by railings. Across that enclosure pass through kissing gate to the corner of Church Road. Turn left on the road and continue alongside churchyard past a large property on the left called "Home Ground" and Berrimore Road on the right. Pass Woodchester Village Hall. Turn right after the Royal Oak Inn then immediately left into Church Lane. There is a small lake behind the wall on the left. The road next footpath is on the left just before the road bends right. However, it is worth going past the footpath to see the former churchyard where the Woodchester Pavement lies buried.

Go back to the walled path near the bend in Church Lane. Pass through kissing gate into field and hold to right hand boundary leading to stile at corner of field. Cross stile to a footpath passing uphill through woodland between fences. Cross another stile and follow left field edge to a boundary with two stiles close together. Cross the next field diagonally to reach a tiny stream by a gate and stile leading to a track. Track becomes a lane leading to the Bell Inn, beside the B4066. Cross road to Bell Lane (slightly down and to the right) and continue towards Selsley Cross road to house called "The Green, Selsley" and continue alongside that road to Selsley Church.

Just after the church, take the footpath across Selsley Common starting near the War Memorial. Follow footpath uphill through the ridges and hollows of the old quarry workings. There are some fenced areas in the middle of the Common but, depending which side of them you go, you will come out on the B4066 with a shorter or longer distance to walk (right) in the Dursley direction towards the Car Park.

By the standards of frequent walkers this is an easy route. The steepest section is on Selsley Common at the end of the walk, when you can look forward to a well-earned rest. Some sections may be muddy. 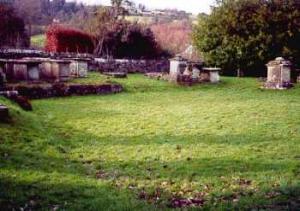 Woodchester Pavement was discovered in a graveyard (now disused) and has been covered over again for preservation. It is a Romano-British mosaic, reckoned to be the largest and most complex example yet discovered in Europe. A replica has been made of the mosaic and is sometimes displayed at exhibitions. The mosaic has yet to be given a permanent home for display, but a replica has been exhibited in several major towns in the region.

Selsley Common is a popular place for summer outings and picnics and provides a commanding view across the Severn Valley. Its ridges and hollows are remnants of ancient quarry workings.

Selsley Church is noted for its Tyrolean style, unusual in this country.