Scafell via Eskdale and Burnmoor Tarn

Climb from the beauty of Eskdale to the challenging heights of England's 2nd highest mountain.

This walk brings combines beauty and a challenge. Starting and finishing at the Ravenglass and Eskdale Railway car park it offers the chance to include a train ride through the gorgeous scenery (or send those family members who don't fancy the climb!).

NB Popular misconceptions... Scafell and Scafell Pike are not the same mountain. They are two neighbouring peaks of which Scafell (this one) is the lesser by 14 metres (46ft).

From Dalegarth Station turn left out of the car park and walk along the road up the dale, in the Hardknott direction. Beside the Brook House Inn turn left to walk into Boot. Go through the village, cross the bridge and continue past Eskdale Mill and straight up the path ahead. Go through a gate and follow the path up the hill. The path runs roughly parallel to the river (though you will hear it rather than see it).

Pass through another gate; the path runs relatively level for a while, then comes to another gate.

Walk alongside a high stone wall to a further gate, and then follow the path alongside conifers. Cross a stream then continue to yet another gate and then walk alongside another stone wall. Wade across a stream, and then step across another after which you will be able to clearly see the peal of Scafell ahead on the right. Pass through a gate at the corner of a field and continue across heathland and over several more streams. Notice a stone hut ahead on the left.

Continue climbing to the ridge ahead. Before you mount the top of the ridge the path merges with another one (coming in from the left). From the top of the ridge you can look down on Burnmoor Tarn. Turn right and follow the line of the Tarn up the valley towards Scafell. Cross a wooden footbridge at the head of the Tarn. Ahead you will see two streams tumbling down the hill; the path goes to the left of both of them and up the appropriately named Green How (the lower slopes are called Hard Rigg).

Keep more-or-less parallel to the stream (though well above it) and head up Hard Rigg/Green How until the route to the peak of Scafell come into view on the right. Cross the stream and head direct for the summit.

Return by the same route.

This approximately 10 mile walk (there and back) includes some very steep sections, but is not a challenging climb by Lake District standards. It does, however, need to be treated with respect and proper clothing and footwear is essential. The boggy ground above Burnmoor Tarn can be deceptively treacherous. 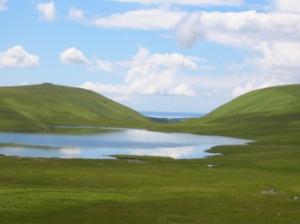 Boot - This tiny village nestles prettily under the lower slopes of England's highest mountain range. The old Eskdale water mill is run as a visitor attraction. 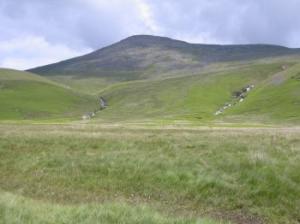 Burnmoor Tarn is an ideal point to pause for a break and refreshment. The lake is beautiful in itself, but its position provides stunning views down to the sea.

Scafell - Don't be confused by the same name applied to adjacent peaks. The neighbouring Scafell Pike is England's highest at 978 metres (3210 feet). Scafell itself is the second highest at 964 metres (3164 feet). The two peaks are joined by a ridge (Mickledore) for those keen to climb both in one day.