A challenging, but achievable route up England's highest mountain. The views are worth it.

Scafell Pike (3206 ft) is an unforgiving mountain and is not pretty in itself. However, it stands watch over one of England's most beautiful regions and presents a challenge that keen walkers like to face. In good visibility the view from the top is just reward for the effort taken to get there.

NB Popular misconceptions... Scafell and Scafell Pike are not the same mountain. They are neighbouring peaks of which Scafell Pike is the higher.

Leaving Seathwaite Farm follow the path ahead staying on the left side of the river. The first mile is along a stone track. Cross Stockley Bridge (235110) and turn immediately left at the other side, going through a stile. The path becomes rougher and you begin to climb, following Grains Ghyll to its top (229087) where you will see the bulk of Great End ahead.

Join and follow another path to the left (South East) for about a mile to Esk Hause (234081). Veer to the right to follow a heavily used path that skirts Great End. The path climbs to a rocky plateau where it becomes less clear. Carefully follow the cairns and clamber over the scattered boulders.

Now you will see Scafell Pike rising like a pyramid in the distance, but you have to drop down into the col, losing a few hundred feet, before climbing upwards again to the summit (205073). Return by the same route.

This is a serious mountain. By international standards it is small, but its rocky approaches test the leg muscles and demand an effort. The weather can change quickly, so check the forecast and take suitable clothing.The distance to the top is only about 4 miles - but then you have to come back again! 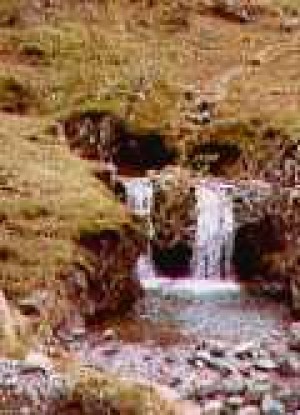 Scafell Pike (3206 ft) is an unforgiving mountain and is not pretty in itself. However, it stands watch over one of England's most beautiful regions and presents a challenge that keen walkers like to face. In good visibility the view from the top is just reward for the effort taken to get there.

Seathwaite Farm though used by thousands of walkers as a route to one of Britain's best known peaks, this is a working farm. Please respect the people who live and work there by being reasonably quiet and keeping to the footpaths. Please avoid using the route late at night or too early in the morning.

Seatoller - Seathwaite Farm, from where this walk begins, is close to the village of Seatoller. Situated at the foot of Honister Pass, the village is small, but provides opportunities for refreshment and is worth a visit on the way to or from this walk.

Sourmilk Gill - The prominent stream (after rain it may be a torrent) that tumbles down the hill on the right as you approach Seathwaite Farm, is called Sourmilk Gill. Always frothing and bubbling down the hill, the name is appropriate, although it is also applies to other streams in the Lake District. This, however, is the memorable one and provides a prominent landmark facing the 'main road' through the Borrowdale Valley.

Esk Haus - Prominent on the map, Esk Haus is little more than a meeting of paths that criss-cross Scafell's flanks. However, it is a good point to take a break and enjoy the views, both towards Derwentwater and eastwards towards the Langdales. The path leading up the Esk Haus passes numerous waterfalls that are so commonplace in this area that the map does not name them - though any of them would be classed as significant tourist attractions if they were in a town centre!