Following a route provided by a mediaeval benefactor, this historic walk takes in some stunning views.

A mediaeval widow bequeathed an annuity to maintain a causeway providing year-round passage across flood-susceptible land. Her generosity also provided a reason for this scenic and varied walk.

Leave the Olympiad Car Park and turn left up the hill then turn right at the T junction.
Follow the road for about 400 yards, then turn left onto the footpath next to Chippenham Training Partnership.
Follow the path under a very low railway bridge and, at the other end of the tunnel, turn left and up the hill alongside a field towards some pylons. Go over a wooden fence at the top corner of the field down a very short path, then turn left onto a track and over a railway bridge. The track becomes a road (Cocklebury Lane) and veers right by some pylons. At the end of the lane turn right onto the main road. Continue alongside the road for a while, then turn right, following the signs to East Tytherington and Langley Burrell.

Turn right down Crossing Lane (just after a pub) go half-right over a bridge, then right at the T junction. Go past a house on the right then turn left onto a bridleway alongside a field. Veer left at the end of the field, then turn right through a gateway. 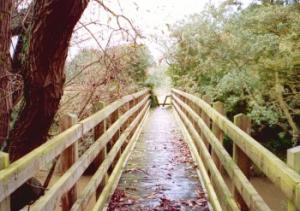 Cross the River Avon on a wooden footbridge. Turn left on the other side of the bridge and follow the field edge near the river bank. Go through a gap in the field boundary and continue alongside the river. Notice the causeway ahead with multiple arches and a road running along the top. Head across to the opposite corner of the field where the causeway meets a river bridge. Climb the steps beside the bridge up onto the causeway. Across the road, notice a memorial, topped with a sundial.

Turn right (away from the bridge) and cross the causeway, walking towards the chapel of St Giles Kellaway. Continue alongside the road then cross to the left at a sweeping left hand bend. A postbox erected in the reign of Edward VII guards the entrance to East Tytherington village. Walk past Maud Heath School and beside the green, opposite the Moravian Church (Hussite), turn right following the signs to Bremhill and Calne. (notice the odd, box shaped sundial).

Go up the 1 in 6 hill and, at the top, cross the stile on the left to a common dominated by a column surmounted by a statue of Maud Heath (complete with shopping basket!). An inscription on a plaque alongside the road opposite the stile bears the doggerel tribute "On this Wick Hill begins the praise of Maud Heath's gift to these highways". The common is a good place to stop for lunch and to enjoy the views over surrounding plain.

Cross the stile back onto the road and turn left. At the T junction turn right, then turn left into a field and follow the path round the field edge to come back along the opposite edge of the field (just after a modern house). After crossing the field pick up the path to head in the direction of a distant monument . Cross a rather overgrown stile and go down a steep field towards a village and a church with a square tower. Keep to the right of the field, down into a valley then up a hill. Go through a gate at the edge of the village, passing a white house, and turn left on the road to go down into Bremhill village.

Just before a stone cross, turn right onto a public footpath that runs round a churchyard. Cross a stile beside a horse chestnut tree, then go through a squeeze stile towards a white cottage, then through another squeeze stile out onto a stone track beside the houses and a pub called the Dumb Post Inn. Across the road, walk alongside the pub down a 1 in 6 hill. Turn right on a footpath, beside a bungalow called Fox Ways, into a field. Cross the field to a gateway and, after the gateway, continue ahead and slightly right towards the younger and smaller trees. The stile is a little uphill and to the right of a metal gate. Pass through some young woodland, then go through a gate into some older woodland and onto a road, where you turn left. Stay on that road, through a hamlet, and downhill past Bencroft Hill Farm and an old Primitive Methodist chapel. Pass a turning (signposted to Tytherington) and continue in the direction signposted Chippenham. Cross a bridge over a weir, then turn right through a gate to follow the river. Cross a stile and keep near the river, down into a shallow ditch then up into the next field.

Do not cross the ditch, but follow the line of the hedge, then go through a narrow gap, then a gate leading out onto a track. Turn right and follow the track to a crossroads, where you turn left and go over a cattle grid. Go through a farmyard. After ¼ mile (where some buildings are just coming into view on the hill ahead) turn right, through a gate and into a field. Keep to the right hand side of the field. Cross a stile, then cross another stile, beside a white building onto a pitted road. Up a slope and on a bend turn right onto a footpath (beside a lamppost) and walk alongside a playing field.

Follow the green alongside a housing estate, then follow a metalled path past the houses, until it becomes a town road. Follow the road straight ahead towards a church steeple (Baydons Lane). Just before the church, turn right onto a footpath that leads downhill, under a building and over a bridge across the River Avon into Monkton Park. Turn left on the path, following the signpost to the Olympiad Centre. Turn right the Sports Centre, follow the path up to the road and back to the Car Park.

This is a longish walk (about 10 miles) but relatively easy, its steepest climbs being alongside public roads. However, it does involve some roads and care should be taken with traffic. 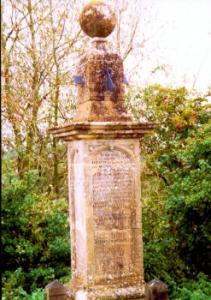 Chippenham - Principal town in this part of Wiltshire, its most attractive feature is the River Avon, which runs through the park close to the sports centre. The town has some ancient features, but is mostly modern, with a large proportion of modern housing estates.

East Tytherington - Notice a postbox erected in the reign of Edward VII - not a common sight, since this monarch, son of Queen Victoria, reigned quite a hort time. The village school is named in memory of Maud Heath. A Moravian Church (Hussite) stands alongside the village green, recalling a denomination that had significant influence on the young John Wesley. 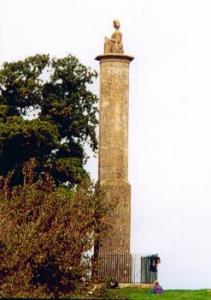 Maud Heath - A sundial beside the bridge where the causeway crosses the Avon bears this inscription - "to the memory of the worthy Maud Heath of Langley Burrell, widow, who in the year of grace 1474 for the good of travellers did in charity bestow in land and houses about £8 a year forever to be laid out on the highways and causeway leading from Wick Hill to Chippenham Cliff".

A statue of Maud Heath (complete with shopping basket!) surmounts a column on the common at the top of Wick Hill overlooking her causeway, which solved local problems of communication across the easily flooded plain.

Wick Hill "On this Wick Hill begins the praise of Maud Heath's gift to these highways" This notice can be seen on a post, almost hidden in the hedge at the top of this 1 in 6 hill. Opposite the notice is a common dominated by Maud Heath's column and offering commanding views of the plain crossed by Maud Heath Causeway.

St Giles Kellaway Chapel - This tiny chapel stands alongside the causeway, shortly before the village of East Tytherington. It is still in occasional use.

Primitive Methodist chapel - A remnant of a more vigorous time for methodism, this chapel (now redundant) can be seen on the left shortly after Bencroft Hill Farm - but the undergrowth is trying hard to conceal it!