A walk through classic Cotswold scenery with commanding views and ancient monuments.

Leckhampton Hill is a popular viewpoint in this part of the Cotswolds, as is Crickley Hill, the starting point for this walk. Route finding is made easier by route markers (follow arrows with Red BACKGROUND - the foreground varies depending whether the path is a footpath or bridleway). But the signs let you down in places so it is a good idea to take the map.

From the Car Park at Crickley Hill go past Visitor Centre and toilets, up steps, following red arrows.

The route turns left then right into woodland. Turn right where another trail crosses and go down hill through woods. Follow arrows with Red background from here on. At the edge of the wood continue straight ahead through gate and across a field through another gate to the road. Cross beside roundabout and follow metalled path beside the Air Balloon public house.

Cross the road after the pub and pick up Gloucestershire Way footpath via a kissing-gate at the top of the bank. Go up through woods to a field and up to a stile (notice Birdlip radio mast on right).

Cross another path and through middle of field then go through gap into corner of another field. Follow hedge on your right, up to a road. Turn left and follow road down towards trees (avoid the right fork). Road runs out in a field next to a mobile phone mast.

Continue straight down grassy lane along ridge. Go through gate (Woodland Trust) and past seat at viewpoint. Path continues down past Long Barrow (on left) to a gate leading to a road.

Turn right along the road, which soon bears right. Our path goes straight ahead along a track marked Public Footpath. 80 metres down path take left fork. Cobberley church is visible through trees. Go through gate along narrow path beside Close Farm and down into village. Just after farm buildings go over a stile along field edge, through kissing gate, down a shallow valley and across a tiny stream on a bridge consisting of a single stone slab. Go up into the village through a wooden kissing gate, across road, up a metalled path beside Rose Bank Cottage to Cobberley village green.

Follow the road slightly left past village green and half-right at the corner. In a short way take the bridle way signposted Seven Springs and Leckhampton Hill. Track runs in a hollow then comes out to a field where you turn left and walk along the hedgerow towards the ridge (Long Barrow and Birdlip radio mast come into view on left). Turn right towards road then turn left and cross to a footpath beside a golf course (the steepest part of this walk). Go alongside Hartley Wood and follow path left (overlooking Hartley Bottom) to walk round 3 sides of a large field then left to pass Hartley Farm and come out to a small road at Hartley Hill.

Turn right and follow the road between farm buildings, then left across farmyard following sign to Leckhampton Hill. Cross stile, pass ruined cottage then cross another stile to walk along field edge, through a gate and down a slope to come out at Charlton Kings Common, a commanding height overlooking Cheltenham. Follow path left along the top of the hill.

The path runs slightly back from the edge behind trees and gorse. Ignore alternative path to left but continue straight ahead. At next fork go right, down through trees. There are a lot of criss-crossing paths here, with some running between the mounds and grass ramparts of an iron age hill fort. Follow the most prominent path right to the top of Leckhampton Hill, a sharp bluff facing the Severn valley.

Continue along the ridge until the path slopes down slightly left towards some trees, past a car park (which is in the bottom of a disused quarry)
Just past the quarry you come to a road - turn left following a Cotswold Way sign
Follow road up to the brow of the hill and turn right at a large tree (following the Cotswold Way signs)
A sign says “Road used as a public path” which is a rather optimistic description of the quality of this rough track
Ignore the alternative footpath that forks left.

The large house on the right is Salterley Grange (a Private Nursing home - it is hard to believe that such a large building was once a private house)
Follow the track down a hill past the Cotswold Hills Golf Club almost to the club house. Turn right on a road (still following Cotswold Way signs)
Go past the National Star Centre (college of further education - specialising in education for the disabled)
At a road junction, turn left along Greenway Lane (which follows the route of a Saxon drovers’ road). (Ignore the footpath going right to Sherdington).
Follow the road up the hill back to the entrance to Crickley Hill Country Park and then up to the car park.

Seven miles may be a lot for some people, but this is not a difficult walk. The steepest ascent is on a normal footpath for a distance of about a quarter of a mile. 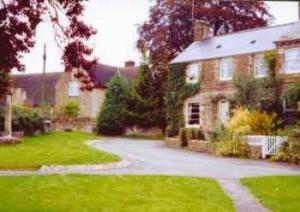 Air Balloon public house. This inn first began serving customers on Crickley Hill in 1777, when it was called the New Inn. It's present name isn't new either and probably dates back to the early 19th century when hot air ballooning was being pioneered.

Cotswold Way. One of Britain's long distance footpaths, this route runs across the Cotswold Hills, an area traditionally rich in wool and still rich in rural prettiness. Some Cotswold valleys are steep but their slopes are rounded and grassy. The honey colour of Cotswold limestone ruralises its buildings in town and village.

Cobberley is a photogenic village of stone cottages around a small village green. The village dates back to Saxon times, though its present centre dates only to the late 18th Century. The name originally meant "Cuthbert's Meadow".

Greenway Lane traces the route of a Saxon drovers' road i.e. a route used to drive sheep between pastures or to market. 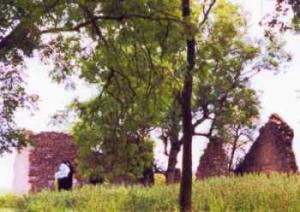 Barber Wood surrounds Cuckoopen Barn and is named after a former chairman of the Countryside Commission. A notice on the gatepost celebrates the building in 1982 of the world's largest straw rick, consisting of 40,000 bales. Shortly after passing Cuckoopen you will encounter a long barrow - undoubtedly ancient, and presumably built as a grave, but with little to give away its secrets.

Crickley Hill has been made into a Country Park and is a popular retreat and viewpoint. It incorporates seceral miles of walks within the park, and features the remains of a Roman villa.

Birdlip has its own spectacular viewpoint, which is not part of this walk, but its radio mast it a prominent landmark visible from several sections of the route. The mast surmounts a small radio station.

Hartley Farm incorporates some ruined cottages, which you pass on the way. They were abandoned during the first half of the 20th century due to problems with water supply. 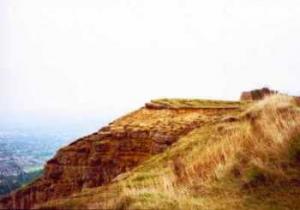 National Star Centre is a college of further education for the physically disabled.

Salterley Grange, now a Private Nursing home, was built in the late 19th century as a private house. It has also served as an isolation hospital for tuberculosis patients.