Starting from the historic village of Laycock this walk traverses part of the pretty Avon valley.

Scenes that are "forever England" follow one another step by step as you follow this pleasant ramble through the Wiltshire countryside. Lacock village has been preserved in a bygone age and is now under the protection of The National Trust. The gentle hills and tradional farming country present views of classic beauty, enhanced by the Bide Brook and the River Avon (crossed more than once on this walk). Lacock Abbey will look familiar to afficionadoes of the "Harry Potter" films.

From the car park take the marked path into Lacock village, past the abbey and the photographic museum. Go past the Stables Tea Room to the Red Lion. Turn right opposite the Red Lion (the road is called East Street, but the street name is not marked)
At the T junction, turn right (opposite the Lacock Bakery) into Church Street (beside the Carpenters Arms) and walk past King John's Hunting Yard and towards the church. Turn left into the road opposite the church and follow that lane to a humpback bridge and ford, crossing the Bide Brook. Cross the bridge, turn right and follow the path beside the brook.

After leaving the brook, continue to the top of the lane then turn right and go through a kissing gate. Follow a tarmac footpath straight across the field (the River Avon comes into view over to the right). Go through a kissing gate and follow the path past cottages to a road. Turn right and, after a few yards, turn right again to cross a bridge over the River Avon. Immediately after crossing the bridge turn left over a stile into a field. There is a tree in the middle of the field; go to the right of the tree and head towards the point where a wall meets a metal fence. Go over a metal stile and cross the road to a tree-lined footpath skirting round the edge of private land. Follow the path round to a double-squeeze metal stile. Go through and follow the left field edge round 2 sides of the field to half-way up the second side.

The next stile comes just after a gated gap and at some seasons may be almost hidden among the hawthorns on the left (GR934694). Cross that double wooden stile into a field and turn right. The path is poorly marked, but roughly follows the right hand side of the field up to a stile which leads to a path along the edge of the woods.

Continue to a stile that leads out of the woods and onto a metalled path alongside the old Berks and Wilts Canal (which is being restored). The River Avon comes back into view down on the left.

The path comes to an old bridge (recently restored), where a seat provides a scenic point for a welcome rest (GR93069). Continue the walk by crossing the bridge sand immediately turn left following the yellow arrow; go over a stile and walk along the left side of the field parallel to the canal. This section of the walk has been re-routed due to canal restoration, so the path is not yet well defined; but keep alongside the canal until you come to a stile leading into woodland.

The signage it misleading here, with arrows pointing in two directions (although there is only one path visible!). Follow the turns of the woodland path then cross a stile into a field. Cross a narrow section of the field straight ahead to the corner of a tree boundary, then follow the line of trees straight ahead along the left hand side of the field. Go through a gate and continue straight ahead across the next field. Pass through another gate  (GR 939703) into another field and follow the left hand boundary along to a tarmac farm road.

Turn right onto the farm road and follow it uphill towards woodland. Cross a cattle grid and follow the road through the woods, over another cattle grid, then out between fields and up to where it sweeps right through a gate/cattle grid, crosses another farm track and leads out to a T junction with a public lane (Grid Ref. 937692). This section the route presents sweeping views of the Wiltshire countryside. Turn left at the T junction and follow this lane for about 100 yards until you reach a cottage.

Cross the stile on the right at the corner of a paddock, next to the cottage and walk diagonally back across a paddock crossing to the opposite hedge and another stile. After crossing that stile go diagonally left across a field to a further stile in the far corner. Cross the left-hand corner of the next field and go over another stile into woodland and follow the path to a further stile. Cross into a field and walk along the right hand edge to yet another stile/gate (GR 938686), which crosses into Bowden Park (an area of parkland below Bowden House, with views down to the plain of the Avon valley).

Move down to the lowest part of the field, away from Bowden House (though you may want to go over and take a look at this impressive house) and down to a gate (Grid Ref. 935684). After passing through the gate head straight down a field to another gate and stile leading into a field that is notable for its Scarlet Pimpernel plants (when in season).

Follow the left side of that field round to a stile/gate beside a house. Cross the stile, follow the path between hedges then turn left on a drive. Go through a boundary onto Bewley Common. The drive changes from tarmac to gravel and sweeps left; at that point turn right onto a footpath leading across the common to a road. Turn right onto the road and follow that road along, past the Bell Inn (on the left) and Lacock Chapel (on the right) over the River Avon and back to Lacock Car Park.

This 5 mile walk is mostly flat and certainly easy. Boots are advisable because some sections may be muddy. 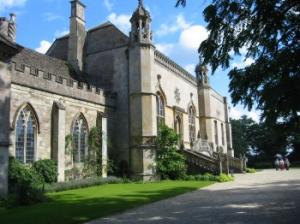 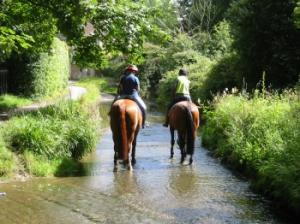 Lacock Abbey has been a country house since Tudor times, but was an active convent (founded in the 13th century) until the dissolution of the monasteries under Henry VIII. Its first non-monastic owner, William Sharrington, seems to have been a local bully, but his actions preserved some fine ancient architecture. The well-preserved cloister and some of its surrounding rooms may look familiar to afficionadoes of Harry Potter films as they were used as sets on more than one of the series.

Bide Brook is normally just a tiny stream on the edge of Lacock village, although heavy rains can swell it dramatically. With the bridge and ford, it provides a strikingly pretty start to the walk. The brook flows eastward into the River Avon. 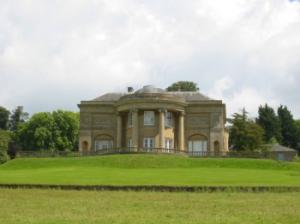 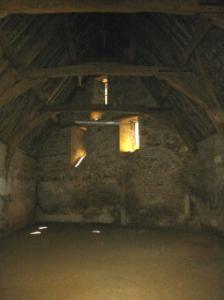 Photographic Museum - Run by the National Trust and known as the Fox Talbot museum, this permanent exhibition celebrates the work of one of the pioneers of photography, who was also a former resident of Lacock Abbey.

Lacock Village is managed by the National Trust and remains a pretty village trapped in a past age. Apart from the Abbey, it boasts a fine example of a tithe barn and some attractive houses, shops and pubs.

Bowden Park, which is worth a short diversion before continuing with the walk, is a fine 18th century mansion surrounded by parkland. It was designed by James Wyatt and is in private ownership.

Bewley Common - A large village green kept as a traditional grazing area in the middle of Bewley village.

Tithe Barn - In the Middle Ages almost every village had one of these, but most have since fallen into ruins and disappeared. But this fine example in Laycock village is in good repair - and this walk goes right past it. Sometimes exhibitions are staged in the barn but, even when nothing special is happening, it is normally open for visitors during the day.