Woodland and meadows, with historic associations - plus the mystery of the boots!

Slaughterford has a bloodthirsty sounding name and it had its dark times in the days of King Alfred and again under Cromwell; but it is a pretty village at the central point in a walk through beautiful scenery.

Walk to the top of the lay-by and follow the footpath sign left down some steps to come out on a road opposite the White Horse public house. Turn right onto the road and walk along past some houses. Go over a river bridge and immediately turn off left over a stile into a field to walk alongside the river. Cross a bridge over a weir and follow a faint path alongside the hill (ignore the stile on the right, which will be part of the return route). Veer left towards some trees and pick up a deeper indented path parallel to the trees and heading towards an electricity pylon.

Cross a stile in the field corner and walk diagonally left across a field towards a church. Go through a gate onto a road. Cross the road, go up steps and over a stile, then continue towards Slaughterford church. Cross into the field around the church and walk around the left of the churchyard. Go through an iron gate and left on a raised footpath beside some attractive cottages alongside a road. Follow the road as it veers round to the left through Slaughterford and alongside the river By Brook. Notice the bridge, but don't cross it; instead continue straight ahead (leaving the river). Follow the road uphill alongside the woods and then round a bend to the right. Continue on straight past a turning and a cottage. After a while the road deteriorates into a bridleway.

Continue up and down the bridleway for some while (passing some footwear mysteriously nailed to a stump!) The path later dips down into a valley and comes to a junction with a metal gate on the right crossing onto another bridleway. Go through the gate and take the new path down into the valley. Go through a gate, alongside a small stream to another gate. Pass through the gates and go over a weir. Where the path forks, take the right fork then immediately turn right again to go up a path through the woods.

Continue up through the woods, over a stile into a field and head diagonally across the field to another stile. A notice announces that you have been walking through Colerne Park and Monks Wood. Walk along the edge of a field, over a stile and cross onto a road. Turn left on the road and walk over the hill to Euridge Manor House (currently being radically restored [March 2004]). Opposite the Manor House turn right through a gateway beside a dutch barn. Go round the fences into a large field and head straight across (the next stile is opposite, but hidden by a rise in the land; you may also have to go round the edge of the field if it has been ploughed).

Cross the stile on the other side of the field and continue straight ahead to the next stile. Cross into a field, following the yellow arrows past a wood. At Thickwood & Colerne Pumping Station turn left and head towards a gate. Go through and right onto a road (signposted Euridge ½ mile) and, after 150 yards, turn left onto a footpath heading across a field towards a house. Go over a stile into another road and go straight ahead. The road leads to a gravel track that runs alongside a farm. Follow the track to the left of the farm and continue alongside a stone wall until you reach a gap. Follow the yellow arrow right and left then follow the path down into the valley, then cross some intersecting paths to pick up the one straight ahead (or slightly left) down the hill. Go through a gateway following the yellow arrows.

Go across the field parallel with the telegraph wires. Follow the line of the hedge to a yellow arrow, then turn right and left to walk between hedgerows until a further gap on the right leads out into a field.

Walk downhill beside the hedge towards the river (notice Slaughterford church up on the right). Cross a stile and turn right to walk alongside the river. Cross the bridge at Slaughterford Gate Sluice and turn left to walk diagonally across the field (away from the river). Go over a stile at the corner of the field and walk straight ahead to a pool and weir (the one you crossed in the early stages of the walk).

Cross the weir bridge and walk back alongside the river to a stile. Cross onto the road and head right, walking back past the cottages to the White Horse pub. Go up steps opposite the pub to come out onto the A420 road at the tope end on the lay-by where you started.

By most standards this is an easy walk, but it has sections that can be muddy and it is wise to wear boots or good walking shoes. 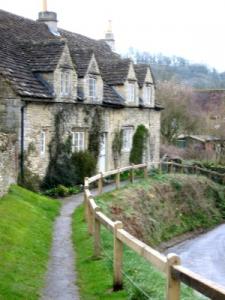 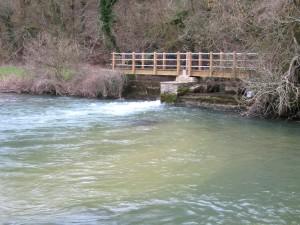 By Brook - This moderate trout stream runs through several pretty villages in the area, including the picturesque village of Castle Coombe (upstream). The ancient Fosse Way runs close to the river for a while.

Quaker Meeting Place - I missed this myself, but one of our correspondents tells us that this historic chapel is well worth a closer look.

Slaughterford - The village originally had a name of similar sound that meant nothing to do with slaughter; in fact it held references to the blackthorn trees that were common in the area. The name was slightly changed to recall the bloody battle in the area when Alfred the Great defeated an army of Danes. 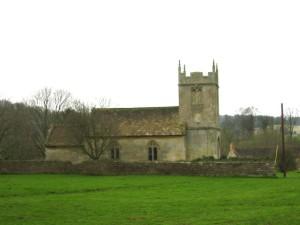 Slaughterford Church - The church you now see was built in the Victorian era at the site where a much earlier church had been destroyed by Cromwell's army during the Civil War. The church had lain derelict for around 200 years. 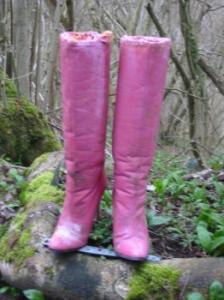 Mysterious footwear! I couldn't find any explanation for this bizarre 'sculpture' - but it consisted of a real pair of fashion boots filled with concrete or plaster and fixed to a log alongside the path. The exceptionally high heels would have disqualify the wearer from walking this path under almost any conditions. One of our correspondents says there was a murder in the area and these boots turned up a year later. It's a grisly story and we don't know if it's true; does anyone else know?
Subsequent correspondents tell us the the boots have gone, but have been replaced by white shoes; the mystery remains.