Stepping stones are a prominent feature of this walk - delightful to some, but frightening to others. After heavy rain the swollen rivers may make the crossings impassable. Otherwise this is a pretty walk with a wide variety of scenery backed by the sound of woodland birds and many open-country species. Dartmeet itself is delightful, with its ancient clapper bridge and less ancient humpback bridge close to the confluence of East and West Dart rivers.

Start at GR. 672733. From the back end of the car park go to the right of the Badgers Holt gate, following footpath sign to Cator Gate via Sherril. Cross the stream, through a kissing gate. The footpath follows the river, though not always right next to it, and crosses a number of tributary streams. Cross a broad meadow (671739) and continue to follow the river back into woodland. At a fork in the river (673746) move to the right until you can cross the stream that comes in from the right, then resumes the riverside walk. Cross another stream at 672747. You will meet a wider tributary that cannot easily be crossed, so turn right and follow the tributary upstream through the woods to a clapper bridge (672749). Walk past the clapper bridge and continue alongside the stream until you come to a wide grassy path, which turns right away from the river (under a line of telegraph wires). Follow the path uphill then cross the stream by means of a clapper bridge that consists of a single stone. Come out at a small road and turn left (in the direction marked "stables"). The road crosses the stream again and goes through a gate marked Babeny Farm. Turn right and then left following Path sign and going round behind the stables. 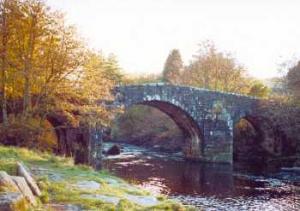 Follow the path uphill (signs and gateposts have light blue waymarkings). It becomes a bridle path and veers to the right and then to the left, eventually leading up to a gate. Follow the marked footpath heading towards conifer woods on the opposite hill. Follow the path down the valley side towards Laughter Hole House (white building with a grey roof) and cross the West Dart river via stepping-stones (662757).

Across the river, turn left through a gate and over a ladder stile then walk up alongside the dry-stone wall near the edge of the woods and right over another ladder stile. Continue up the hill (it is quite boggy here, so take care).

[SHORTCUT missing out the 2 tors: when you come to a path (657756) turn left in the direction of Dunnabridge Pound. Apart from passing through a few gates, this is almost a straight path to the road.]

Near the top of the hill turn aside to ascend Laughter Tor. This area is "access land" which means that roaming is permitted but the paths are ill defined. Bellever Tor, your next destination, can be seen ahead.

From Laughter Tor take the path downhill towards the left-hand corner of the woods. Go alongside the dry stone wall beside the woods and through a gate at the top corner of the field. Turn right towards Bellever Tor then take any of the many small paths up through rocks, gorse and heather to the summit. Looking down from there, notice a road in the distance. Take the wide path leading down in that direction towards a ladder stile. Don't go over the stile but go through a gate and follow the path alongside a dry stone wall (signs and gateposts now have yellow waymarkings). At the corner of the field go through another gate and continue beside a dry stone wall, then cut across the field diagonally to a gate which comes out on the road at Dunna Bridge (646746).

[FOR THOSE WHO TOOK THE SHORTCUT, THIS IS WHERE THE DIRECTIONS RESUME]

Turn left over a cattle grid (646746) noticing the river in the valley to the right. After 100 yards turn right onto a footpath (not signposted) and go down into the valley. Follow the signposted "Public Bridle path via Stepping Stones to Sherberton". Once over the stepping stones (648737) follow the line of a tributary stream (approximately straight-ahead). After about ¾ mile cross that stream over another set of stepping stones (647733). Turn left and follow path through a gate onto a road. Turn left on road and go over a bridge (647731) and follow the road uphill in a wide leftwards sweep.

Go over a cattle grid past a rough parking area then in 50 yards turn left onto a path that leads down into the valley (651727). The path passes a house called "Clouds Edge" then leads down to a narrow road passing through the hamlet of Hexworthy.

Follow a Public Footpath sign through a gate into a farmyard. Go through another gate diagonally left across the yard (655729) and follow path between two dry stone walls out to the corner of a field. Turn right and walk down the hill until you meet another path. Turn left on that path and walk down into the valley then cross a stone stile onto a road at Hexworthy Bridge. Go over the bridge and follow the road uphill past Hucaby House. Walk up the hill past St. Raphael's church then, opposite Hucaby Farm (667731) turn right onto a quarry track and immediately left onto a footpath.

This is not a difficult walk, though some may find the 8 miles of up-and-down walking  a bit wearing - especially when the ground is soft. Special notice should be taken of the weather, both on the day of the walk and previous days as the stepping stones may become flooded. 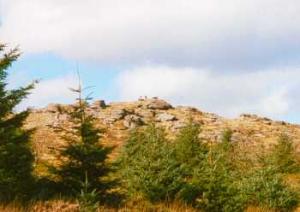 Bellever Tor reaches 1440 feet (443 metres) and is topped by a tumble of rocks that can be easily climbed. The view from the top is attractive, taking in the East Dart valley and several woodland areas. 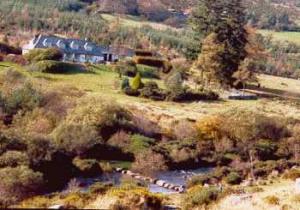 Laughter Hole lies in the valley between the heathland of Babeny and the woodland that fills the area betweeen Laughter Tor and Belever Tor. It is a pretty spot, where a set of stepping stones (see left) crosses the West Dart river. 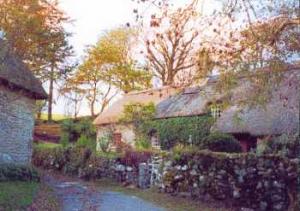 Hexworthy is a tiny village, virtually devoid of facilities, but blessed with characteristic Dartmoor cottages in an out-of-the-way setting that can sensibly only be visited on foot.