Just too small to be a mountain, but challenging enough for an afternoon. Don't miss these views over Borrowdale. 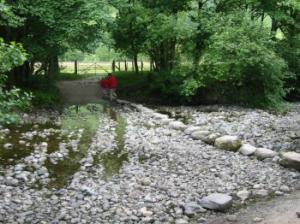 Set out from the National Trust Card Park in Rosthwaite village (GR 257149) past the Tea Rooms and follow the track between stone walls. You soon reach the banks of the Reiver Derwent, which you can cross by means of stepping stones (GR 254149) or via a bridge about 100 yards further along the path.

Turn right and go through a gate (NB if you crossed via the bridge you are already past the gate) and follow the well-defined footpath parallel to the river. Cross 2 small footbridges (GR 252151) and continue ahead to a gate (GR 251152) after which the path turns left away from the river.

Turn left to go over a stile (GR 252155) and start to ascent steeply uphill following the rough path (with many loose stones, this path may be quite slippery).

Go through a gate through a wall (GR 250157) and follow the path steeply up through bracken. Cross a ladder stile (GR 249158) and turn right to climb up and over a large spoil heap. 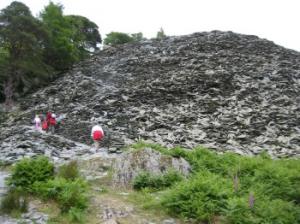 [From below, the spoil heap looks like a treacherous pile of loose stones; but a well-beaten path winds its way up the mound]

The top of the spoil heap (GR 250159) provides a good viewpoint before the final ascent to the summit. 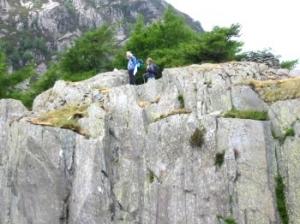 The route to the summit follows the obvious path ahead and past some old quarry workings. The summit consists of a grassy mound, partly surrounded by trees and topped by a stone outcrop (GR 250159).

Return by the same route.

By strict definitions, Castle Crags 946 foot height does not qualify it as a mountain, but it provides a worthwhile challenge and some wonderful views over some of the prettiest scenes in Lakeland.

This is a short walk (1 1/2 miles to the summit) and you can get there and back in a couple of hours without hurrying. But watch out for places where steep slopes are covered by loose stones and it is easy to slip or lose your balance. Wear good shoes or boots and take care!

Bowder Stone - this massive erratic stone stands in woodland close to the A5289 Borrowdale Road. A National Trust car park provides easy access to the Bowder Stone, which is also a popular spot for rock climbing. From the same NT car park you can walk to the banks of the River Derwent to obtain one of the classic views of Castle Crag (see picure on left). 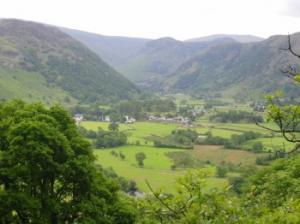 Borrowdale - this valley is a popular route for walkers travelling to Seathwaite Farm to climb peaks in the Scafell range. But it is also an attraction in itself, being one of the prettiest valleys in the Lake District.

Castle Crag  - while this fell is lot really high enough to be classified as a mountain, it provides a significant challenge to those who would climb to the summit. Wainwright insisted that it be given respect, despite its lack of vertical feet (or metres). The remains of quarry workings can be seen near the top, including a large spoil heap that forms part ofthe route. It is believed that the summit was once fortified.

River Derwent - this river runs the length of Borrowdale and feeds the popular tourist attraction of Derwent Water (the lake alongside which Keswick stands). It can be accessed from many points along the Borrowdale valley, including many that provide attractive picnic spots and (with care) places for paddling.

Rosthwaite - the village lies just off the A5289 and is an active farming community as well as an access point for walkers. There is a Tea Room in the village alongside the route to Castle Crag.