Cheddar Gorge is justifiably popular with tourists but much more interesting on foot than in a car. Burrrington Combe's less famous gorge is popular with rock climbers and worth the visit. This is quite a long walk with some steep sections but you will end your day with happy memories and a sense of satisfaction. 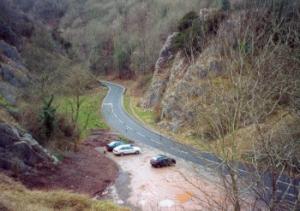 (Grid Ref.490579)  Cross road and take path beside Ellick House up hill, first S then, after 150 yards SW to Beacon Batch. (Grid Ref.484573)  From viewpoint continue along path over hill, aiming slightly to the left of woodlands, leading eventually to farm gate and downhill path to Tyning's Farm.

(Grid Ref.470565) From Tyning's Farm go E along road, first past farmland then beside trees until signposted right to Piney Sleight Farm (also signed "Cheddar 3m"). Follow path down past Charterhouse Farm.
(Grid Ref.477557) Turn left (E) after Charterhouse Farm on path beside stone wall. Stiles are isolated where fences have been removed. This is part of West Mendip Way. (Grid Ref.486553) Cross stile into Long Wood and continue steeply downhill. At stile and Information Board join Nature Trail past Black Rock. 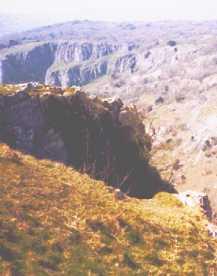 (Grid Ref.482545) Cross Cliff Road at Blackrock Gate and join steep path leading up through woods, then parallel to Cheddar Gorge. Continue on path, sometimes looking over Cheddar cliff top into the gorge, to the viewing Tower. Go down Jacobs Ladder steps into Cheddar.

(Grid Ref.470565) Turn left (W) between farm buildings to rejoin West Mendip Way. Continue past houses and spring, through woodland to forded stream near Holloway Rocks. (Grid Ref.458574) Where paths fork go right leading NE steeply up through woods onto Rowberrow Warren. Continue E across heathland until track intersects with a N/S path near Black Down

At almost 14 miles, casual walkers may find this hard. It starts with a very steep scramble up the side of Burrington Combe and includes another steep section at the top of Cheddar Gorge, where rain can make the stony path slippery. Elswhere, the walk is relatively easy.

Beacon Batch is a high point above Rowberrow Warren and a former Beacon site, close to a radio tower. The view from here is worth the walk.

Black Rock  is an impressive cliff, close to and above Cheddar Gorge, but slightly removed from the main gorge. Surrounded by woodland it is a good place for bird watching.

Burrington Combe  is not as dramatic as Cheddar Gorge, but is just the same kind of geological feature. The cliffs overlooking the car park are popular with rock climbers. The Rock of Ages has a fame of its own.

Cheddar is one of South West England's most popular tourist sites and becomes very busy during the Summer months. Apart from the Gorge, it boasts two famous show caves, the challenging (for some) steps of Jacobs Ladder and a range of pubs, restaurants and shops. And you could always buy some cheese!

Cheddar Gorge offers one of Britain's most striking views to be seen from a car. The road runs through the centre of the Gorge between 200ft high cliffs. It is a home for buzzards and many other birds, and is grazed by a large flock of Soay sheep (with impressive horns). Whilst the road is busy, the risk for walkers is tempered by the fact that motorists are forced to drive slowly along this steep and winding road.

Rowberrow Warren is a wide heathland area commanding a view across the Mendips and (nothwards) towards Bristol airport. It is intersected by several streams, some of which disappear into sink holes.

Rock of Ages is a large fissure in the cliff opposite the car park at Burrington Combe. The Rev Augustus Toplady once sheltered here during a storm and was inspired to write the traditional hymn "Rock of Ages cleft for me".