The Golden Valley offers a delightful sample of Cotswold beauty enhanced by canal and riverside walking.

The valley of the River Frome to the east of Brimscombe is known as Golden Valley, an attractive vale in the Cotswolds. This walk includes impressive views, historic industry, attractive woods, pools and streams and the towpath of the Thames and Severn Canal. A delightful sample of the beauties of the Cotswolds. 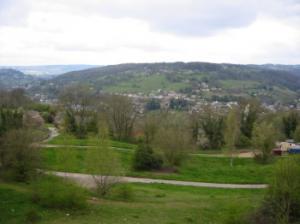 Cross the main road and walk into the village of Brimscombe, following the road left past the Ship Inn and up the hill. Pass a large house, on which is the faded advert for the former Nelson Inn. Continue up the hill past Victoria Road, then turn sharp left up a tarmac drive and pass through a metal gate. As soon as you have gone through the gate turn sharp right over a squeeze stile and take the indistinct narrow path up a grassy hill, parallel to the trees.The Golden Valley comes into view to the left. Continue steeply up the hill and under some large oak trees to a fenced corner where you go through a metal gate into a field. Turn left and head and pass to the left of a large beech tree. Walk diagonally right across the narrow dimension of the field to a wooden stile. Go over the stile and follow a hedged path to a road, where you turn left (Grid Ref. 869014). 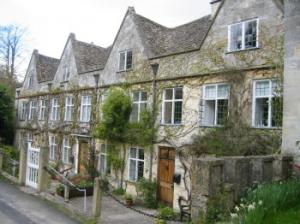 At the next junction (with a triangle of grass in the middle of the road) fork left. Walk to a bend (just before the road goes downhill) then turn right, past a the National Trust sign following the footpath onto Besbury Common (Grid Ref 872014). As you follow the path alongside a stone wall there are several seats from which you can enjoy the view over Golden Valley. Continue ahead to a lane, then cross the road and go up steps to continue along the edge of large paddock next to a wood. Pass through several squeeze stiles, keeping straight ahead, until you come alongside a television mast (Grid Ref. 882017). Soon after that you reach a stone slab stile, which leads you into woodland. Take the path straight ahead keeping to the left of a stone wall. The path drops down to meet a road (pass behind a National Trust sign for Hyde Common). Cross the road to continue along another road straight ahead (passing an imposing house with iron gates). A short way along the road you will pass an impressive four-gabled house called Hyde Court.

When you come to a junction, turn left (Grid Ref. 887017). Be careful as this small road can be quite busy. After 100 yards, take a right fork past a green into a narrow road (pass a no-through-road sign). Pass a National Trust sign for Hyde Common. Go up the hill past the Victoria Memorial Mission Room and keep left at the next junction. Keep going along the same road until, just after a large cottage, the road downgrades to a stone track passing through a gate into woodland (Grid Ref 892022). You are coming into Cowcombe Wood, which can be very pleasant, although sometimes muddy. Where the path forks, keep left. Then, at the next junction, keep straight ahead and continue ahead, ignoring all side paths. When you come to a metal gate and stile (Grid Ref. 901022), cross into a field and continue to another gate between a bungalow and garage to come to the A419 road. 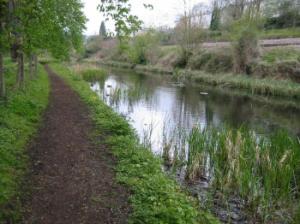 Turn right and walk carefully for about 100 yards along this busy road, then cross over to a footpath on the opposite side. Follow the footpath steeply downhill next to a wire fence and, after a few yards, cross a stile. Go straight across the corner of a field to an unpromising stile that looks as if it goes to a dead end! Turn left as soon as you cross the stile and walk down a woodland path to the left of a wire fence. Cross another path and walk towards a wall, which the path then goes alongside to a stile, where you cross a railway line. Go over another stile and walk to a gate leading onto a road.

Your route goes right at this point, but just to the left is the village of Chalford and you may wish to take a break at this point. If so, turn left and walk past the former Valley Inn to the recreation ground (beside the Thames & Severn Canal and the River Frome). Then return to this gate to continue up the hill and right over a railway bridge. Continue steeply uphill for about 150 yards then take a footpath on the left to Westley Walk. Walk down beside the wire fence then, at a junction with a broad grassy path, walk straight across to continue up another narrow path. Go uphill to a wooden gate (a sign indicates that this is not a public right of way but walkers are allowed to use it). The path goes through Westley Wood. As you see a gate ahead at the end of the wood turn left through a wooden squeeze stile. The path leads down to a bridge, where you go over the railway and turn right, walking parallel with the railway down to a road (Grid Ref. 915028). 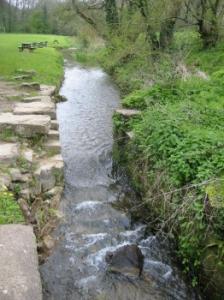 Turn right on the road and walk along a few yards to a footpath sign, when you turn left to go over a footbridge (over a derelict canal lock) to turn right onto the towpath alongside the Thames & Severn Canal. The house and garden behind the fence is called Baker's Mill and formerly produced cloth and (later) corn using coal shipped in on the canal. If you peer through the fence and hedge you will see the attractive millpond of Baker's Mill. Continue on the towpath to go through a kissing gate and cross the canal at a bridge (the building that looks like a lockkeeper's cottage was originally a pub, called the Oak Inn). Go through another kissing gate and continue past two locks (called Puck Mill Lower and Upper) and from here on, the canal is dry.

Continue along the towpath and pass another lock. Follow the path beside a wire fence, with a view down the right to a meadow with a stream. Go through another kissing gate and continue to Whitehall Bridge (Grid Ref. 929030), which has a keystone inscribed 'W.D.1784'. Cross the canal by way of the bridge and follow the left hand path, keeping parallel with the canal initially but then veering away to the right up the side of a small valley. Pass Trillis Cottage and continue on a metalled lane to a T-junction (Grid Ref. 925034). Turn left onto the road and walk about 100 yards to where the road bends right; leave the road at that point and go straight ahead through a narrow squeeze stile beside a gate into a field. Walk along the left side of a field and go over a wooden stile. The path then runs parallel to power cables across a very large field and eventually reaches a gate in the top corner (the highest point in this field). Keep to the left hand edge of the next field, following a dilapidated hedgerow and join the road (over a stile next to a gate) at Oakridge Lynch (Grid Ref. 918035).

Cross the road and continue on the road opposite but, after a few yards (beside "Treetops") fork left and walk along a bridleway between stone walls. At the end of the bridleway, beside a Methodist Church, turn left onto a road. Follow the road right up a hill then turn left (beside "Yew Tree Cottage". Pass the Butchers Arms pub and the Post Office and continue to a T-junction and turn left. Walk down past the village school, across the side of the village green and, in the corner of the green just past St Bartholomew's Church, cross a stile beside a gate. Veer slightly right and go across to a gate in the bottom right corner of the field. 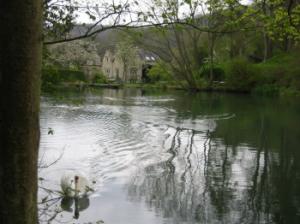 Cross a field to another gate and then down a woodland path beside a wire fence. Go over a stream and down to a gate and stile leading out onto a road. Turn right onto the road and go downhill past some houses. At the junction, turn right following the sign to Chalford and continue on that road along the bottom of the valley back into Chalford village. Pass the playing fields and turn left to cross the River Frome, then turn right onto the canal towpath (Grid Ref. 903025).

From this point, the Thames and Severn Canal remains close to the River Frome and the footpath runs between the two. After a few yards the canal starts to look the part again (i.e. it has water). Pass some cottages alongside the remains of the Red Lion Lock and a bridge. Continued straight ahead past the New Red Lion Inn and come to the A419 road (Grid Ref.896025). Cross the road to the right of the Springfield Hotel entrance and go into an industrial premises, turning immediately right to walk along the opposite towpath between the factories (Elbesee Products and Just Craft) and the canal. The canal soon disappears into a drain duct then reappears a few yards further on. Beside a bus shelter the path turns to run alongside the main road. 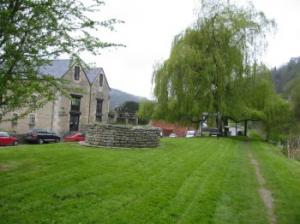 Cross a side road (which goes to Hyde and Minchinhampton) and turn down a path opposite Christ Church to rejoin the towpath and the canal. Pass Belvedere Mills and the impressive winding gear displayed on the green. Cross a road again and go down steps to rejoin the towpath (Grid Ref. 889024). Go under a bridge and along a pretty section of stream and gardens. The canal goes into a tunnel under the railway and the path then doglegs and itself goes under the railway. Go under another bridge; the canal at this point is completely choked with reeds. The path now draws nearer to the River Frome. Pass a bridge and approach the back of some industrial buildings; walk behind Wimberley Mills, cross a road and continue alongside the canal. Go under the railway and another road bridge and then follow the riverside path. Turn left across a bridge at Port Mill and right onto the road to walk back to the A419 and the starting point.

Approximate distance 11 miles. No part of the walk is difficult, but it can be muddy in parts so walking boots are recommended wear. Some people may find the walk long, though it can be shortened by cutting out the Chalford and Oakridge loop and returning along the canal bank.

Brimscombe This country village carries many clues to a busier, more grimy past when Brimscombe was an industrial centre for the region. The word 'port', applied to one of the industrial estates, may sound pretentious these days, but this section of the canal was formerly an important part of a busy shipping network.

Thames and Severn Canal The canal is in a variable state of repair, with some sections looking much as it would have been in the heyday of canal transport. Other sections are weeded up or virtually dry. But the views on this route give a strong impression of the past importance of this national artery, leading as it does, past many relics of historic industry that once relied on the canal for shipping its goods out to distant markets.