Coast, moor and woodland with a chocolate box village scene on the way.

If you like scenery you will love this walk. It takes in coast, moor, woodland, rural villages, streams, flowers and wildlife. Bossington and Selworthy attract visitors in their own right. Here is an opportunity to combine both with a large measure of natural beauty, plus an invigorating walk. 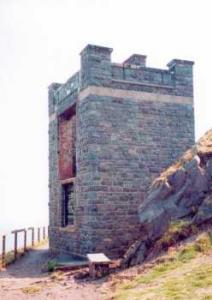 Cross Horner Water via to footbridge at the back of the Car Park and turn left on the Coast Path signposted Bridleway to Hurlstone (alongside the river).

The path turns uphill beside a gate and continues through the woods. Opposite a wooden cottage notice the view of Porlock Bay through an opening in the trees.

Go through a gate and continue uphill where the woods give way to heathland scenery and take you to the National Trust stone marker post for Hurlstone. The South West Coast Path turns right, but continue straight ahead to see the old coastguard station up at Hurlstone Point. From the CG lookout retrace your steps then, after 200 yards, take the left fork leading across the hill to a crossroads where you turn left to resume the Coast Path in the Minehead direction.

Follow the path steeply uphill towards the head of the pass between Hurlstone Point and Bossington Hill. The path levels out a little as it crosses another path beside a seat. Continue straight ahead up the hill, staying on the Coast Path and passing another path that comes in from the left.

Where a bridleway turns right to Lynch carry on straight ahead. A few yards further on another path leads right towards a Car Park and some trees, but you keep straight ahead. Selworthy Beacon is now coming into view.

Where the Coast Path turns off to the left at the next junction continue straight ahead to the summit of Selworthy Beacon.

At the next junction take the left fork but notice a road coming into view ahead. When the path comes alongside the road move onto the road for a few yads then cross to the path signposted Bridleway to Dunster and Selworthy. At T junction turn right towards Dunster and Selworthy. Shortly after turn right to go down into Selworthy Combe towards Selworthy. The path enters the woods and goes alongside a small stream. Ignore all side paths and follow the stream until the path comes out to a road beside a church. Go through the gate to the road and immediately turn right through a smaller gate leading into the National Trust owned village of Selworthy Green. Walk down through the village, past the thatched cottages to the top of the lower green, then turn right following a sign to Agnes Fountain and Allerford. 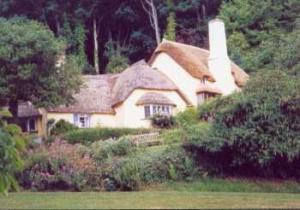 Cross a plank bridge over the stream then go over a stile and follow the path uphill alongside a fence. Turn left onto a wider path at a T junction. At the next intersection take the right fork. T into another path and follow the path left in the direction of Bossington (through mixed woodland). Follow the "permitted bridleway to Holnicote" and at the next crossroads continue straight ahead in the direction of Hurlstone and Bossington. The path sweeps left and is joined by another path coming in from the left. Go past a log shelter (with seats) and go straight ahead at the next crossroads.The path narrows to go through a small gate uphill following the rim of Lynch Coombe. Follow the path round the rim of the coombe till it crosses a stream and turns back to face down towards Porlock Bay. At the next intersection (beside a seat) take the left fork to go down into Lynch Coombe. Ford a small stream, then cross an even smaller rivulet.

Where a path comes in from the right from Hurlston, but continue straight ahead. Ignore the gate and paths on the left (to St Agnes Fountain and Allerford)and continue downhill beside the stone wall. At the next junction remain on the path straight ahead to Bossington. Go through a gate and continue downhill beside a stream. Veer left at the next junction and cross a stream, then take the right fork (the sign to West Lynch is a few yards further on). The path comes out to a rough road between cottages. Cross the river Aller on a stone bridge beside Lynch Country House and turn right onto the road.

Go past the Exmoor Falconry and Animal farm and continue along the road to cross Horner Water over another stone bridge leading back into the village of Bossington. Pass through the village and turn right into the Car Park

This is a moderate walk of little more than 5 miles, but the heathland sections are very exposed if there are strong winds. The path over the pass between Hurlstone and Bossington Hill is steep in most people's language. If you are taking a dog it should be kept on a lead as you cross the pass because of the presence of adders.

Allerford  is the village you pass through immediately you turn off the A39. It does not feature as part of this walk, but the packhorse bridge and ford in the centre of the village make a visually pleasing sight well worth stopping for.

Bossington village boasts a number of pretty cottages, many of them thatched, lining the villgae green and the main street. Guest Houses a pub and a restaurant are available in the main street.

Chapel of Ease - The Lynch Mediaeval chapel of Ease (in front of the Exmoor Falconry and Animal farm) was built to house occasional worship for villagers who could not manage the journey to the parish church in Selworthy.

Horner Water - This pretty stream runs down from Exmoor and reaches the sea at Bossington. Its end is in a shingle bar, rather than an open estuary, though the occasional storm breaks through the bar to provide, briefly, an area of open water to the sea. The stones soon accumulate to rebuild the bar.

Hurlstone Point - There is a National Trust stone marker post at Hurlstone, marking a point where you can see a fine view of Porlock Bay and Exmoor cliffs. Hurlstone Point itself is a commanding headland boasting a disused coastguard station of stone construction, which is worth a look. The heath and scree slopes provide a home for Siskin, Wheater and Peregrine - and there are also Adders in this area.

Porlock Bay Opposite a wooden cottage in the early part of the walk notice an opening in the trees, which allows a good view of the bay, looking across the marshes towards the shingle bar (notice a limekiln and two pillboxes).

Quantocks -  The Quantock Hills are in view from the approach to Selworthy Beacon and until you turn down into Selworthy Combe.

Selworthy - The National Trust owns the village of Selworthy Green and a pretty place it is. You can walk on footpaths and greens through the village, past beautifully preserved and maintained thatched cottages with not a motor car in sight. Refreshments are available in the village (and film, if you didn't bring enough to capture this delightful scene). There are Public Conveniences below the lower green out on the road (right hand side).

Selworthy Beacon - The highest point of this walk (1000 feet, 308 metres) Selworthy Beacon provides commanding views of the Bristol Channel (across to Wales), Exmoor, the Quantocks, Selworthy Combe and Porlock Bay.