This walk starts from the public car park near the beach and Rackwick and climbs steeply to join the main route (which starts further back on the main road, but has no parking). The cliff-top path provides exhilarating views as a prequel to the amazi 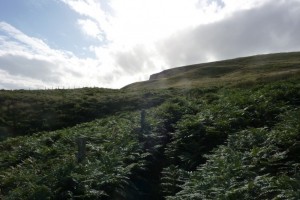 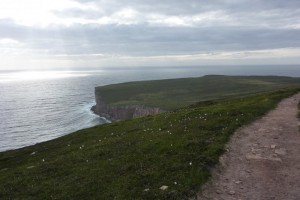 Start from council car park at Rackwick (GR 202993).
Walk East along a gravel track and over a cattle grid (GR 201992). This path is signposted “Old man of Hoy”, but it is not the main path, so signposting is not always prominent of consistent. At GR 199991 an arrow points right, but it is best to ignore it (the path is points to has become seriously rutted and boggy).

Continue ahead until the obvious path turns right, but go straight ahead through a gate (GR 198991). The path climbs to another gate (GR 196990) then crosses a stream (there is no single crossing point… look at the gaps in the undergrowth, and the steps created by previous walkers, and select the crossing that suits you best).

Veer slightly right and approach another gate (GR 194990) and keep to the left of it (the path to the right of the fence does join the main path, but it is a less direct route and is also steeper). 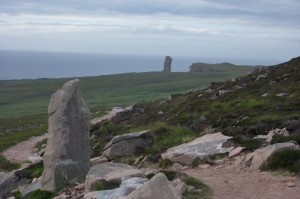 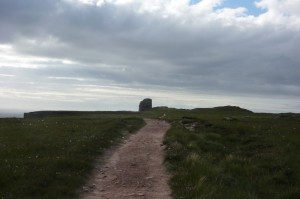 Follow the path diagonally uphill to join the main path at GR 192990 (this wider path starts further back near the main road, but not near the car park). Having reached this path the route becomes very easy to follow, being well maintained stone and gravel all the way to the “Old Man”.

As you mount the summit of the path you will pass an upright pillar stone (GR 185992). Depending on visibility, at this point you will get your first glimpse of the “Old Man of Hoy” sticking up above the cliff in the distance. Continue to follow the path until you reach the headland right opposite the “Old Man” (GR 178007).

Retrace your steps by the same route

In good weather this is a pretty safe route (although steep at first). After rain, the first part of the walk may become slippery over grass, heather and bracken. In high winds it is better to avoid this high, exposed route altogether. 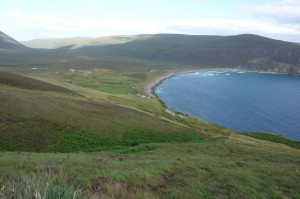 I used the path from the Rackwick car park because that was the obvious place to park. Using a motorhome, the car park is an ideal overnight campsite (and free!). But the path starting from further back along the road is easier and wider (my route joins it after about a kilometre).