CORFE CASTLE is a focal point in the Purbeck region of Dorset and a popular tourist destination. This walk enables you to get away from the crowds and view the sights from a different perspective. And what a perspective it is as you walk along the ri 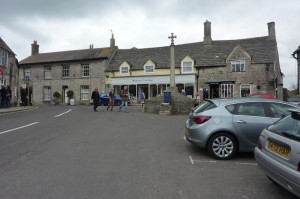 The walk starts from the CAR PARK on the south side of Corfe village, some way down West Street and on the right (GR 958817).

At the back end of the car park cross the road and go over a stile to follow a footpath in the field next to the playing field.

Follow the hedge on the left side of the field towards the trees in the left hand corner. Half-hidden among the trees you will find a kissing gate (GR 956816). Go through the gate and continue along the path. Cross a stone arched FOOTBRIDGE over a stream (GR 955815). In a few yards the path forks three ways (none of which is well marked!). The route uses the middle path, which crosses a field (going up the slope) towards woodland. 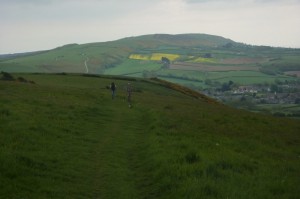 After following a stream to a BRIDGE (GR 946812) cross a STILE onto a FARM TRACK that leads up to the ROAD into CHURCH KNOWLE. In CHURCH KNOWLE village (GR 941819)  take the footpath next to the CHURCH, keeping the church to your left, follow the footpath beside Church Farm, through a gate and up the hill. 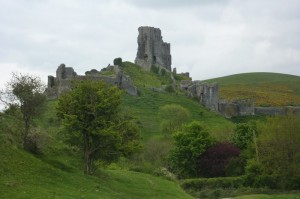 Follow the footpath through a gate and up the hill to a GATE above CHURCH FARM (GR 943823). An alternative path runs parallel to and below the steeper part of the ridge, but the views are well worth the climb. If you prefer to avoid the steep climb follow the lower path.

As you approach the road behind CORFE CASTLE notice a sign (GR 957822) pointing to THE RINGS. This is a diversion from the route but is worth following for a historical understanding of the area. Cross the ROAD (GR 956821) when the path continues up to THE RINGS. 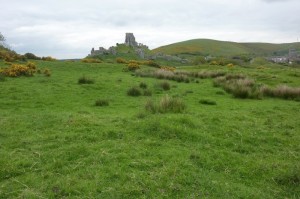 THE RINGS (GR 956820)  is a series of banks and ditches believed to have been originally fortified by KING STEPHEN in the period known as THE ANARCHY, when Stephen was fighting EMPRESS MATILDA for possession of the ENGLISH CROWN. His army's fortifications were intended to attack CORFE CASTLE, which was in the hands of one of MATLIDA'S supporters. But the attack was unsuccessful. Centuries later, the forces of OLIVER CROMWELL re-fortified the site and successfully attacked CORFE CASTLE from the same base.

Returning from THE RINGS, cross the road to rejoin the path you were on, then re-cross the road to join the metalled FOOTPATH  (GR 957822) behind CORFE CASTLE. This path leads to the centre of the VILLAGE and the CASTLE ENTRANCE.

CORFE CASTLE & VILLAGE (GR 960820). CORFE CASTLE is the name of the CASTLE itself and the VILLAGE. It is a popular tourist area and therefore has many shops, pubs and restaurants. To return to the CAR PARK walk along EAST STREET.

This walk passes through farm and heathland and includes no serious walking or climbing hazards. Obvious care must be taken when crossing or walking along the road. The road from Corfe to Church Knowle is fairly narrow and rarely busy, but the bends are sharp and drivers may not see you until quite close.

Corfe Castle is a popular visitor attraction and a dominant feature on the Purbeck skyline. The village surrounding it is also popular and therefore has lots of shops, pubs and restaurants. The castle sits on a prominent hill that stands in the middle of a gap in the commanding ridge Purbeck Hills. Knowle Hill is part of that ridge and provides marvellous views of the castle and the surrounding area - including Poole Harbour

The Rings is now little more than a ring-shaped series of humps in the ground, but it has had moments of historic prominence, the second of which explains the current state of Corfe Castle. King Stephen's forces built the first ramparts here to mount an attack on Empress Matilda's troops occupying Corfe Castle; but the attack was repulsed. Centuries later, The Rings were re-fortified by Cromwell's troops and this time the attack was successful. The castle was conquered and gunpowder reduced the walls to their current state.