I started the walk from Porthcressa Bay in Hugh Town, but the footpath goes all the way round the island and can be picked up at any point on the way. The route mounts clifftops and drops to the beach-side, but is never very steep. However, it is une 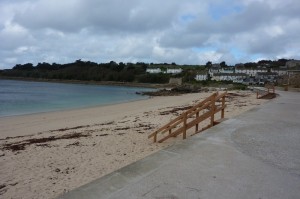 From PORTHCRESSA BEACH (GR 902104) head eastwards along the promenade and mount the bank to cross a small green and join the coastal footpath. The path soon turns right and leads uphill. A short way further along the former path has been re-routed (due to erosion) and turns further uphill to pass between allotments, then resumes its alignment parallel to the coast.

Head southwards along the coast towards the prominent headland of PENINNIS HEAD (GR 910094) which features a small automatic lighthouse. 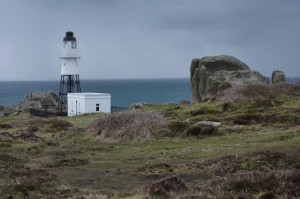 There are several routes around the headland, any of which are appropriate, depending what you want to look at and that state of the weather (in strong winds you may wish to keep back from the cliff-edge!). After passing the lighthouse the various paths converge and follow the coastline round towards OLD TOWN BAY.

As you approach OLD TOWN BAY (GR  911100) you pass St Marys Old Church and its graveyard, where Harold Wilson (British Prime Minister 1964-1970 and 1974-1976) is buried. The path comes out on a road, where you follow the pavement around the bay to resume the footpath heading towards the opposite headland (TOLMAN POINT). Go past a path that leads to a restaurant and look out for where the footpath turns left a little before the headland (the path is less prominent at this point). 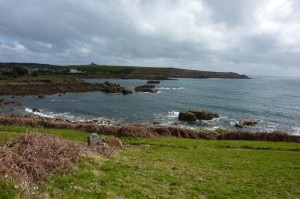 Head up the hill past the small bay of PORTH MINICK towards ST MARY’S AIRPORT (GR 922100). At the top of the hill watch the warning signs and hold back if lights flash and you hear the siren sounding to warn of an approaching ‘plane. If all is clear, go over the headland, crossing the approach to the airport runway and get past the other warning signs before stopping or lingering. Head down to the next bay, which is called PORTH HELLICK and look over to the other side of the bay to see the prominent rock pile known as DICK’S CAIRN or the LOADED CAMEL.

From this point you have a choice of paths, the right-hand one running parallel to the cliff edge and the left-hand one taking a short-cut across the headland. (NOTE: the cliff path leads past an ancient burial mound, but the inland short-cut misses this feature)

The path turns slightly inland then climbs to meet another path at a T junction. Turn right to continue along the coast, then loop left to pass DEEP POINT (small headland) and DARRITY’S HOLE (small bay). At a junction a signpost points to Cairn Vean Tea Rooms; this is a possible diversion if you’re ready for refreshment, but the main footpath continues to the right and drops down to the sands of PELISTRY BAY (GR 927121). Walk across the top of the beach and up a bank to rejoin the footpath and walk past TOLLS ISLAND (which is an island at high tide but connected by bank of rocks at low tide). 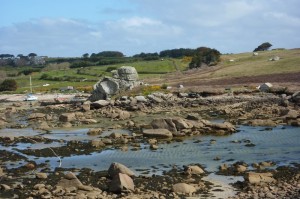 The path continues close to the coast and around WATERMILL COVE, then rises towards INNISIDGEN UPPER BURIAL CHAMBER (GR 922126), which is one of two impressively well-preserved ancient tomb sites overlooking the sea. The main islands of St Martins and Tresco come into view from this point on. Continue to follow the footpath between woodlands and the sea.

Round the top of the island, passing BAR POINT, then head uphill past PENDRAETHEN (GR 911127). At this point you will see the BBC television tower up on the hill to your left. The path loops round this hill then, as the path levels off, you turn right to continue parallel to the coast. 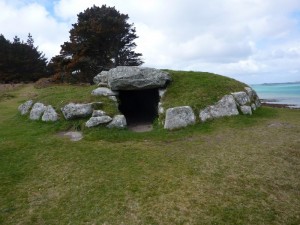 At HALANGEY DOWN (GR 909124) you pass the extensive remains of HALANGEY ANCIENT VILLAGE, where the lower walls of many small buildings can be seen.

If you detour to wander up through the village you can find a large BURIAL CHAMBER at the top of the site. After you leave this site (at the foot of the field) the footpath splits in to a lower and a higher path; but both paths come together above CARN MORVAL POINT. From this part of the route you get excellent views of two other islands… TRESCO is the larger one, with woodland, and SAMSON is the smaller one, with two prominent grass-covered hills.

The footpath passes Juliet’s Garden Restaurant, then comes out to the road. Follow the road along to PORTHLOO BEACH (GR 909113) from where you can clearly see HUGH TOWN with its HARBOUR and QUAY. On the coast side of the Boat Park the path resumes briefly and then rejoins the road for a short way, before looping around THOMAS PORTH and back to the road again. Continue along THE STRAND, past a triangular green, past the Town Hall to the centre of HUGH TOWN. Just past the BISHOP & WOLF Public House turn left to follow GARRISON LANE, go past the old Wesleyan Church and up to a junction. Turn right after the POLICE STATION (GR 901105) and then fork left up GARRISON LANE. Follow the road left then pass under the arch of the GARRISON entrance (GR 900106) and uphill past the STAR CASTLE HOTEL.

The footpath loops round the headland, passing several coastal defence structures, such as the WOOLPACK BATTERY (GR 898099). In view at this point are the islands of St Agnes and Gugh. The path turns northwards overlooking PORTHCRESSA BAY and widens out to become a track, then a narrow road, passing another coastal battery. Follow the road back round to the archway (GR 900106) and walk back through Hugh Town, past the Police Station (GR 901105) and back to the stat point at PORTHCRESSA BEACH (GR 903105) 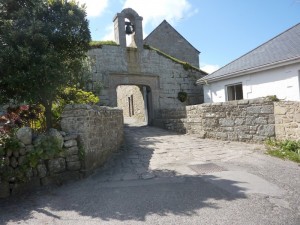 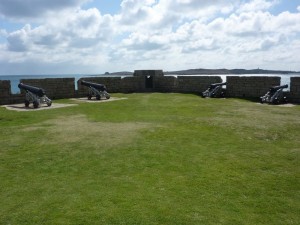 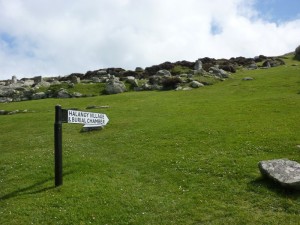 Outside the streets of Hugh Town, the route barely touches the island's roads. The footpath keeps safely back from the cliff edges and, where is crosses rocky ground, it is not especially challenging. Take reasonable care; wear sensible footwear; and keep back from cliff edges (especially in windy conditions). One point needing special care is the airport, where the footpath crosses close to the start of the runway; warning lights flash and a siren sounds as planes approach and, at all times, you need to cross quickly and not linger at this point.