I have visited these places individually, but combining them into one continuous walk makes for a delicious scenic experience. The walk takes in 4 gorges of which 3 contain rivers (Hoar Oak Water, East Lyn and West Lyn rivers) and one has been left h 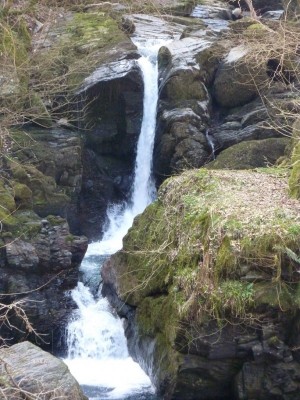 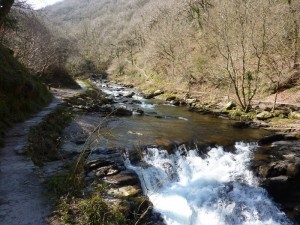 Go through the gate on the east side of Hillsford Bridge and join the broad, gravel footpath that runs alongside Hoar Oak Water. Signposts point the way the Watersmeet. On the way you will pass a side path on the left, leading down to the viewpoint for a waterfall… this is a worthwhile diversion. As you approach Watersmeet the path forks, offering two paths of which either is OK (the one on the left leads steeply down to a bridge leading to Watersmeet House; the one of the right follows a gentler zigzag route down to the bank of the East Lyn River, then back to Watersmeet House).

From Watersmeet (GR744487) follow the main path alongside the East Lyn River (now swollen by the waters of Hoar Oak Water). Signposts point to Lynmouth and Countisbury. Initially, you are presented with the option to walk alongside the river or to mount to a higher path; but the lower path turns upwards to join the higher one after 15o metres. There are no gates or stiles along the route to Lynmouth.

The only alternative path offered along the way is to Countisbury, which you should ignore. As you approach Lynmouth town itself cross the footbridge to walk along the opposite bank of the river. Public conveniences can be found on the approach to the Bus Station (before the main road bridge)

Walk through the town, either using the main shopping street (where there are several pubs, restaurants and coffee/teashops) or along the riverside promenade. Either way, you come to the pier, where the river meets the sea in a small harbour (GR724495). A few yards further ahead you will see the Cliff Railway on the left hand side of the road (GR723497). For the steep ascent to Lynton you have the option either of riding on the Cliff Railway or walking up the paved footpath (which zigzags across the route of the Cliff Railway). Either route brings you to the centre of Lynton (GR70495) where you should turn right and follow the main street through the town and out to the Valley of the Rocks. No turns are necessary. 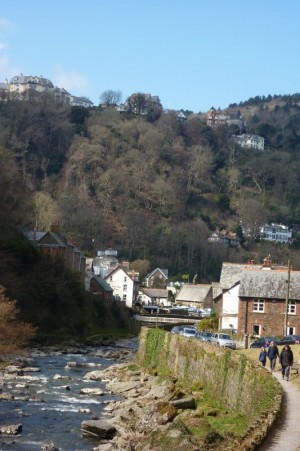 The route heads straight through the Valley of the Rocks, but you may wish to linger here and explore some of the side paths up among the rocks and along the cliffs. A particularly impressive option is the climb to Castle Rock (GR704498) the highest of the mini-peaks in the Valley, which can be recognised by its fortress-like shape. The rocks at the top of Castle Rock form a small enclosure with commanding views across the Bristol Channel and along Lee Bay.

Leave the Valley of the Rocks, following the narrow toll-road, until you reach Lee Abbey (Christian Retreat Centre). Opposite that range of buildings, take the left fork in the road and continue for about 50 yards before turning left up some steps leading onto a footpath (GR699493). Follow the footpath up and over the hill. The route passes through woodland and heath, through a gate/stile and past Sixacre Farm. Go through another gate to leave the farm and continue on a paved road/farm track to a T-junction with Lydiate Lane (next to the Lynton Camping and Caravan Club Site at Dean Cross). Turn left and follow Lydiate Lane to the next right turn, which leads down to the A39 road. The route continues for a short way along the A39 to Barbrook (take care, this is a busy road, especially in the holiday season). At Barbrook (GR715477) go past the garage, cross the bridge and continue for a short way up the A39, looking out for a gate on the left leading down to a footpath. Join the footpath, following signs to Lynmouth and Hillsford Bridge (NB the main road goes directly to Hillsford Bridge, but it is steep and winding and not safe to walk alongside traffic). 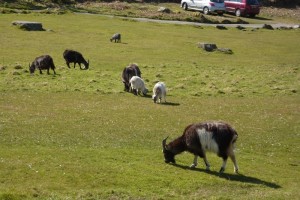 Follow the footpath alongside the West Lyn river as far as Lyn Bridge (see cottages on the other side of the river) then turn right on a footpath following the sign to Hillsford Bridge. The path crosses fields and heathland and provides superb views down to Lynmouth and across to the moor. Pass a duckpond (recently constructed) and briefly join a farm track at Lower East Lyn (GR736483).  At a T-junction with another track turn left (the track on the right leads back to the A39). There is no signpost at the point, but you will pick up another sign to Hillsford Bridge a few yards further on.

The path gradually veers to the right until you reach a fork where the left option is signposted to Watersmeet and the main path ahead is signposted to Hillsford Bridge. This path eventually comes out on the A39 at the foot of the dangerous hairpin bends you avoided by taking the footpath route. Walk a few yards down the road and across to the National Trust Car Park where your walk began

The walking is generally easy. For the only really steep climb, I recommend that you use the Cliff Railway, which is a memorable experience (although a zig-zag path is available for hardy types who want to add to their exercise!). The route is marked "moderate" because some people might find it rather long. However, care must be taken as part of the route folows roads, and some of them carry fast traffic (particlarly the A39 towards the end of the walk). The final footpath stages are specifically included to avoid a risky section of the A3 (even though this increases the distance to be walked).

This is an incredibly scenic route taking in a remarkable variety of environments. The facilities at Lynmouth and Lynton are excellent for shopping, eating and relaxing. And an early break at Watersmeet House also offers opportunities for refreshment.

Take time to visit the Museum in Lynmouth to see the story of the floods that devastated this town in 1952. It is also a reminder of the destructive power of these innocent looking moorland rivers.