The Malham area is justly popular with walkers, but this walk offers some solitude between the popular highlights. Some sections are challenging, but the rewards are worth it.

The stunning gorge, cliffs and waterfall at Goredale Scar.

The impressive cliffs of Malham Cove. 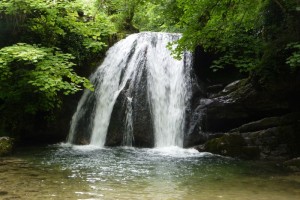 Start at the National Park Centre in Malham (GR905727). Turn left onto the road and walk into the village to cross the river either by the main bridge in the village centre or by a nearer footbridge part-hidden among trees. Turn right onto the footpath to follow the river back past the National Park Centre. Go through two gates, after which the path leads away from the river. Go through a kissing gate, following a signpost to Janet’s Fosse, then go through another kissing gate beside an old stone building. Pass through two more kissing gates, the second being beside a stream and waterfall. Go through a further kissing gate at GR909727 and continue along a paved path, which runs parallel to a stream.

Go through another kissing gate and walk alongside a steep grassy bank/hill. The next kissing gate leads you through into a National Trust woodland area designated “Janet’s Fosse”.  Arrive at Janet’s Foss waterfall (GR912633, which is a fan shaped fall cascading over tufa deposits that the water has laid down over centuries. Continue up  a rocky path that leads off to the left of the waterfall basin  and pass through a kissing gate where you turn right onto a small road. Pass Goredale Bridge (on the left) noting the signpost to Malham Cove (some people may wish to return to this point rather than climbing up Goredale Scar). Continue along the road for about 50 yards until it veers right, at which point go through a gate at GR913635, following the footpath signposted to Goredale Scar. 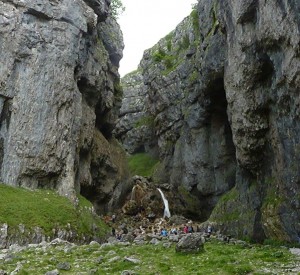 The path passes through Goredale Scar campsite and on up to the waterfall. The next section of the route is the part that gives this walk its “difficult” classification and you may wish to abort at this point and retrace the route to Goredale Bridge from where you can take the shortcut direct to Malham Cove. However, the walk through the gorge to view the waterfall from the bottom is easy, and the view is definitely worth the effort.

The designated footpath continues by clambering up the boulders alongside, and to the left of, the waterfalls. Experienced rock climbers would class this as an easy climb, but it requires care and concentration and should not be attempted except in appropriate footwear. However, it is quite a short climb and the scenery on the way up and at the top of the gorge is worth the effort if you can do it. The jumble of boulders that form the waterfall fills only the lower part of the gorge and, at the top of that scramble, the path again becomes a well-defined track up the left side of the gorge.

Having reached the top, walk parallel to the cliff edge to a stone stile (GR914643) signposted “Footpath to Malham Tarn”. This stage of the walk is easy, following a fairly well-worn path across more-or-less level ground. The path approaches a dry-stone wall with a road running behind is. As the path begins to turn to run parallel with the wall, go straight ahead to a stone stile at GR906653. Because the stone steps blend into the stones of the wall it is easy to miss it so, if you find yourself walking alongside the wall, you may need to retrace your steps. Cross the stile and turn right onto the road. 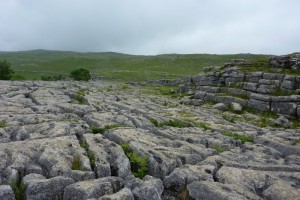 Where the road turns left (signposted “Malham Tarn 1.5 miles”) continue on the gravel path leading straight ahead (signposted “National Trust, no cars”). The OS map shows this as an “area of shake holes” and, if you look to the right, you should see a number of depressions where the soil has leaked through into caverns deep below the surface. Shortly, behind a line of trees, the outline of Malham Tarn comes into view. The track now joins the Pennine Way and leads to a gate signposted “Malham Tarn National Nature Reserve”. Go through the gate at GR828665 and continue ahead, passing the imposing cliffs of Great Close Hill/ Great Close Scar, and proceed to the Tarn.

After viewing Malham Tarn, retrace your steps to the gate and then continue southwards on the Pennine Way as it forks right just after the gate. The Pennine Way is well signposted with the familiar acorn symbol as used on most national footpath routes. The path comes to a car park and road  at GR894658. Cross the car park and turn right onto the road, then continue for a short way down the road, and turn left to pick up the Pennine Way footpath at a kissing gate (signposted “Malham Cove 1.5 miles”). Look out for another signpost about 50 yards across the field, redirecting you slightly left to continue on the Pennine Way. 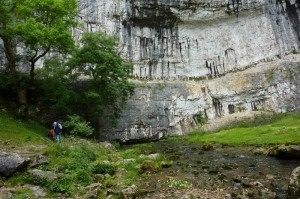 Follow the path down through the gorge of Ing Scar (the path is quite rocky in places). The path turns sharp left to go over over a stile at GR891649 and continue steeply down beside a dry-stone wall. Go over a low stile and continue ahead. At GR897843 turn right to walk across the limestone pavement at the top of the imposing cliff of Malham Cove.

At the other side of the limestone pavement, pick your way carefully towards the cliff edge to go through the narrow gap in the wall and kissing gate that leads to the steps and path going down to the foot of Malham Cove.

Then retrace your steps to join the riverside path leading back towards the village of Malham. The RSPB has a “peregrine viewpoint” just before the next gate. Go through the kissing gate at the National Trust signpost for Malham Cove Fields. After a while, go through a gate and turn left onto the road that leads into Malham. Continue down through the village and back to the National Park Centre.

This walk is marked "difficult" primarily because of the section through Goredale Scar, which involves a challenging clamber up the rocky bed of the waterfall (but not in the wet bit!). A further rocky section passes downhill along the floor of Ing Scar, where the challenge mostly involves taking care on a rock-strewn path. And that soon leads to a steep downill section as you approach the top of Malham Cove. The walk across the limestone pavement is not difficult, but take care as you cross the grykes (gaps between the limestone slabs).Apart from those sections, the walk is mostly easy.

This is a defining area for classic limestone scenery. Malham Cove is a huge cliff, where a Niagara-style waterfall once cascaded over the edge; but the water now flows out from under the cliff, having gone the way of all rivers in limestone areas. Wherever water runs, it eventually percolates through the porous limestone and carves out caves and underground rivers. Even the open moorland is dotted around with shallow depressions, indicating hidden caverns beneath the thin soil.

Goredale Scar is the most challenging section of this walk and some people may consider it too risky. The path marked on the OS map really does go up the side of the waterfall and over those massive boulders. But it is dramatically beautiful and your successful climb will be rewarded by stuning views and the feeling of a job well done.

Malham is a popular village and offers a number of shops, restaurants and pubs, plus a large Visitor Centre with public conveniences and a big car park.