A historic castle and deer park, easy walking and panoramic views make for an ideal half-day out.

A walk around Berkeley, Stone and Ham including panoramic views over the Vale of Berkeley and the River Severn. This walk passes through the Berkeley Deer Park (also called Whitcliff Deer Park) and past Berkeley Castle.

Walk into the centre of Berkeley then take the B4509 towards Ham and Stone, following the signs to the Jenner Museum). Pass the church and Berkeley Castle and, as soon as you leave the village, turn left, cross a stream and go over a metal stile following a footpath sign. Cross the field diagonally right to the right of the most prominent clump of trees to pick up a riverside footpath following the line of the Little Avon River (Grid Ref. 684985). Follow the river upstream, go through a kissing gate and continue alongside the river, cross a stile next to a gate opposite Brownsmill Farm. Go through a gate beside the bridge and continue following the path alongside the river. Pass though or over several more gates and stiles until you reach a concrete bridge (with gates), which is called Matford Bridge. Cross the bridge and turn left, keeping close to the river and continue to a stile in the corner of the field. At this point turn right and follow the right hand edge of the field all the way round to a gateway. Walk across the next field towards Stone Church (the spire may not be easily visible in all seasons, but it is behind the clump of woodland in the centre of the field). Pass beside the woodland and follow the field edge round to a road, where you turn left (Grid Ref. 683957) 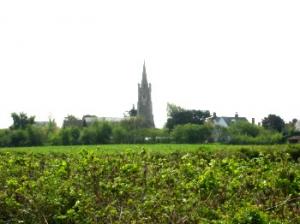 Turn right on the A38 main road and then right again at the village green beside the church and pick up a narrow road in the corner of the green signposted 'No Through Road'. When the lane comes to a gateway turn left onto a public bridleway (Grid Ref. 681956). This path can be very muddy! Keep to the same path, crossing a wooden footbridge, and continue until you reach a road. Cross diagonally left to pick up the bridleway on the opposite side of the road. Follow the path to a wooden footbridge (Grid Ref. 672957) and cross into a field. Head across the field diagonally left aiming for the middle of the opposite hedge and cross into the next field via a double squeeze stile. Head straight across the next field to a similar stile (about 20 yards to the right of the Dutch barns). Walk diagonally left across the next field to another double stile leading to a road (Grid Ref. 667960). Almost immediately turn left onto another footpath, crossing an unusual design of stile beside a gate. Walk up the left edge of a field to a stile and turn right, following the yellow arrow. Walk up the steep bank to a narrow gap in the hedgerow among the trees concealing a small path. Before proceeding, turn round to admire the spectacular view from across the Vale towards the Cotswolds and the Tyndale Monument.

Go through onto the path, veering left and follow it round alongside a red brick wall and over a stile. Cross another stile and immediately turn right over a large step stile to enter Whitcliff Deer Park (also known as Berkeley Deer Park). Walk straight along the ridge, which gives excellent view of the Severn Valley to the left and the Vale of Berkeley to the right.

As you come near to a castellated building (Park Lodge) another path leads off to the left - but remain on the ridge path, following the yellow arrows (Grid Ref. 669969). Continue following the yellow arrows to the left of e line of trees (the riverside building on the left with two large towers is Berkeley Power Station). The path eventually turns into a stony track and drops down to skirt the gardens of a former gatehouse and to a step stile (similar to the one by which you entered the park).

Cross the stile and walk diagonally across the field towards a road. Cross another stile to join the road and walk straight ahead into the village of Ham. Continue ahead through Ham, passing The Salutation public house (Grid Ref. 679984). Cross a bridge over the Little Avon river and continue up the road into Berkeley and back to the car park.

With just a couple of short, relatively steep sections this is not a difficult walk. But good boots are advisable, especially on the low-lying paths around Stone, which can be very waterlogged. The distance is about 5 miles.

Berkeley Castle - This ancient castle is famous as the alleged scene of Edward II's murder. Some authorities question that story, but there is no doubt that he was imprisoned in the castle and that he disappeared. The castle is open to the public and is well worth a visit.

Jenner Museum - Edward Jenner, who discovered the smallpox vaccine, was born in the Old Vicarage at Berkeley in 1749. The hut where he did his experiments and treated his patients is beside the rectory wall bordering the churchyard. The Jenner Museum is close to Berkeley Castle.

Little Avon River - This little river is not connected to the larger 'Bristol Avon' and, in places, its relatively straight course looks somewhat man-made. But it is a natural stream and adds some pretty features to this walk.

Whitcliff Deer Park - Also often called Berkeley deer park, this large area of parkland was first enclosed by Lord Maurice of Berkeley in 1243. It occupies a ridge giving impressive views over the Vale of Berkeley on one side and the River Severn on the other side. The deer are usually easy to spot, including some 'white harts'.