A ridge walk along Black Hill to Hay Bluff with magnificent views all the way.

The Black Mountains cannot compete for size and ruggedness with their neighbours, the Brecon Beacons, but they make up for that with simple beauty. Black Hill and Hay Bluff are promontories at opposite ends of the same ridge and both provide memorable and photogenic views. 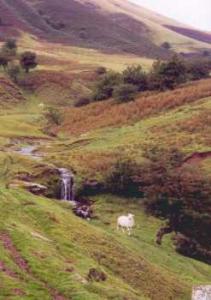 Start from the roadside car park (which overlooks the remnants of a stone circle). Cross the road and walk over heathland towards the left brow of Hay Bluff. The path is grassy and ill defined path and crosses many fords and wet patches. 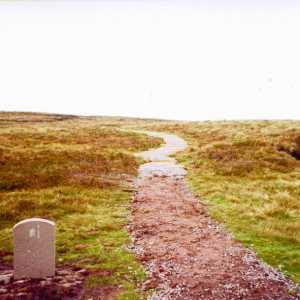 Every so often a worn stretch or an exposed patch of rock makes the path a bit clearer, but don't be deceived, sheep also create paths! If you keep crossing fords and keep Hay Bluff on your right you are going in the right direction. Streams constantly wash the route so good boots are essential on this walk. Continuing along the line of Black Hill, the path gradually climbs the slope until you reach the end of the ridge, where you turn right to climb steeply upwards. As you climb the ridge the views get better and better and there are several rocky ledges where you can sit and drink it all in. The summit is marked with a triangulation point.

From the top you may notice 2 white communications dishes in the Hereford direction (SAS training centre). The ridge in the opposite direction carries Offa's Dyke on its impressive march south

The path from Black Hill to Hay Bluff runs alongside (or just below the ridge) and later crosses the well marked Offa's Dyke Path. At that point you can see the trig point marker on Hay Bluff summit. The path is wide, but can be very waterlogged.

From the summit of Hay Bluff you can see across the Wye Valley (though not the river itself). Turn left and walk southwest a short way along to the top of the path that leads down to the car park (you can see the road and car park from the top). It is possible to go straight down the end of the Bluff from the summit, but that is a much steeper route.

Whilst these are not major peaks, they are high enough to deserve respect. Reasonnable fitness will get you to the top easily, but be prepared for the weather to change and wear waterproof boots - your feet will get wet.

Black Hill - at 2,080 feet (640 metres) this does not count among the world's major peaks. But it commands a view worth every step you climb. Looking south from the summit, the ridge slices through a green vista of heath and farmland.

Daniels Place - a farm and a few cottages of no particular note. But spare a few moments to enjoy the streams and tiny waterfalls that pour off the hills towards this settlement.

Hay Bluff - this promontory marks the northerly limit of the Black Mountains and commands a view across the beautiful Wye Valley. It is justifiably popular with tourists but the narrow roads prevent it from becoming overcrowded.

Hay on Wye - this small town draws visitors by combining its key position in the Wye Valley with its fame as a centre for book buying.

Hereford - the county town of Hereford lies several miles to the east, but you cannot fail to notice its SAS training centre marked by two large white communications dishes visible from Black Hill.

Offa's Dyke - this ancient embankment was constructed by King Offa's men for reasons similar to Hadrians Wall. The dyke, which is still visible along parts of its route from Shrewsbury down to Chepstow, is followed by a well marked long distance footpath. Offa's Dyke footpath crosses the route of this walk.

Stone circle - the car park below Hay Bluff overlooks the site of an ancient stone circle. Whilst there are no impressive large stones today, you can see small embankments and impressions in the grass.

Wye Valley - the valley of the river Wye is noted for its pretty charms and draws thousands of tourists to the area. The river itself is not visible from any point on this walk but it is worth lingering for a look as you drive to or from the area.