Known as the Horseshoe Walk, this circular route traverses four peaks, including the highest in south Wales.

Each of these peaks is impressive in its own right, but the approach from Upper Neuadd gives the opportunity to take them all together in a relatively easy-to-follow sweeping ridge walk. But "relatively easy" is dependent on weather. If the wind is high it is better to go on another day. 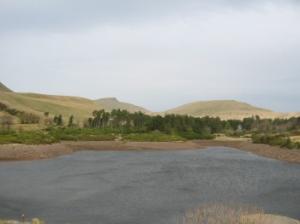 The presumed start for this walk is at the point where the Taf Trail crosses the road (GR 035174). If you are starting from the car park further back along the road you need to walk along the road towards the Neuadd Reservoir to pick up the start.

Head towards the reservoir with the mountains on the horizon ahead. This valley is like a large cwm (corrie) surrounded on three sides by a high ridge. At the end of the road (GR 032180) go through gate beside a cattle grid near the buildings of the Lower Neuadd Reservoir (this is the start point for people who have parked at the road end). Follow the path left and walk down past a stone building to the grass-covered dam for the Lower Neuadd Reservoir. The 4 peaks are visible ahead, with the largest, Pen-y-Fan in the centre. 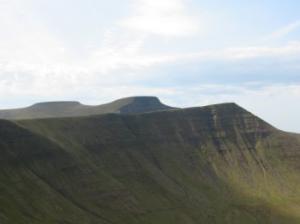 029180). Follow the path over a stream and then steeply up towards the ridge, heading towards the top of the conifer plantation you can see on the left. Go past the conifers and on up to the high ridge (GR 022177) where you turn right onto a path. This path roughly follows the 2000 foot contour. Follow the path all the way to the intersection with a large path (GR 006210) which comes in from the left and leads to the right towards the peak of Pen-y-Fan (this is the popular route from Storey Arms, sometimes disparagingly called the "motorway route"). Take the left fork to mount Corn Du, the first of today's 4 peaks. 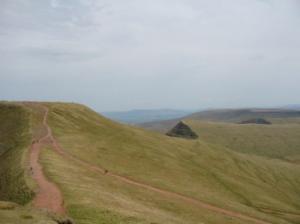 [NB less able walkers may wish to miss out Corn Du by following the path to the right, either going straight to Pen-y-Fan or continuing all round the ridge and avoiding the high peaks altogether]

The route to the top of Corn Du is an obvious path, involving a bit of rock scrambling close to the summit, which is at GR 007213 (summit height 873 metres or 2840 feet). 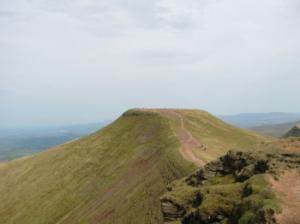 From the summit of Pen-y-Fan walk around the edge to find the steep, rocky descend onto the pass leading across to Cribyn. The summit of Cribyn is at GR 024213 (height 795 metres or 2580 feet). From Cribyn you can see the most dramatic view of Pen-y-Fan, looking towards the steep cliff that forms its eastern flank.

Moving away from Cribyn you take the obvious route across the pass to the smaller peak of Fan-y-Big (which is more like a rocky headland). 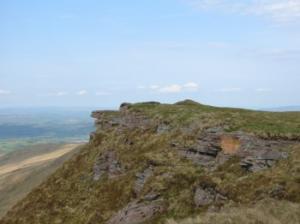 Cross a large path that goes across the Bwlch-ar-y-Fan pass and walk over to a stile (GR 032205). Go over the stile and follow the steep path up to the summit of Fan-y-Big (GR 037207) (Summit height 719 metres or 2340 feet). From here you can return by the same path or continue along the ridge until you come down to another path near a cairn (GR 037199) where you can turn right to walk back down towards the stile you crossed earlier.

As you come to the bottom of the path you may choose to follow one of the shortcuts across to the larger path that crosses left along the ridge and parallel with the reservoir below (this is the path you crossed earlier at Bwlch-ar-y-Fan). Continue along this path until it forks (GR 034102); if you started at the end of the road by Lower Neuadd Reservoir the right fork will take you back to that point. Otherwise continue ahead, down into a gully and up to a gate. There is a stile in the fence just past the gate. Continue ahead on the path until it rejoins the road at the point where you started.

In mountaineering terms, these are small mountains, but don't take them carelessly. Weather can change quickly in the Brecons and they can become slippery and dangerous, especially in high winds. Wear proper walking boots and, remember that the summits may be much colder than the valleys. The peaks are close to one another and the overall distance is just 9 miles. 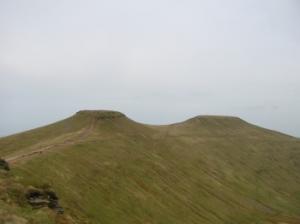 Pen-y-Fan is the highest peak in South Wales and is a popular target for walkers. At 896 metres / 2939 feet it is not in the alpine league of mountains, but it is not a place to be in bad weather. This is a very exposed point and a slight breeze in the valley may be more like a gale at the top; but the climb is not difficult in normal conditions and the views are rewarding.

Corn Du - in this competitive age it is not cool to be second, and Corn Du suffers from being the second highest peak in South Wales... but it out-competes its neighbour (Pen-y-Fan) for the sheerness of its drop on the northern flank and the craggyness of its rocky approach on the southern side. In reality, Corn Du and Pen-y-Fan are inseparable twins that complement one another. If you climb one you just have to climb the other. In any case, it is only a short walk from one to the other. Looking down from the steepest side of Corn Du you gaze into the cwm and tarn of Lyn Cwm Llwych. The Tommy Jones obelisk on the path down to the tarn (not part of this walk but see the alternative walk up Pen y Fan & Corn Du from Cwm Llwych)