The Old Man of Coniston via Goats Hause

Climb to the top of the peak that dominates Coniston and return to the village to celebrate your achievement.

At 803 metres (2276 feet) the Old Man of Coniston is a small mountain, but a challenging enough climb for an average walker. What it lacks in height it makes up for in views, offering a commanding view of two beautiful lakes and the dramatic sight of Goats Water (tarn) cowering under the forbidding cliffs of Dow Crag. The return path passes Low Water, another tarn, but with grassy edges and sparkling water in complete contrast with the dark face of Goats Water. The conical summit also provides views of the Langdale Pikes and the Scafell range.

From Coniston village, walk up the steep road that starts opposite the petrol station (gas station) on the south end of the town At the waterworks (grassed-over reservoir) turn left following the signs to Walna Scar Road. At the top of the metalled road the green lane called Walna Scar Road begins at the gated car park. Follow the green lane up to a shoulder. Ignore the path leads that off to the right, signposted for the summit, and continue straight ahead on Walna Scar Road.

Go through a gate and continue until you reach a right fork with steps leading up to a path skirting round behind the Old Man. (If you reach a bridge you have gone too far and will need to back-track to find the steps.) 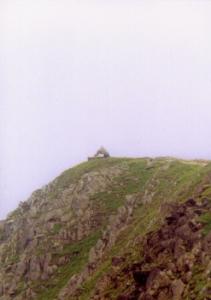 Head towards the striking prominence of Dow Crag, past the old quarry, over a ridge, then down to Goat's Water (a tarn trapped between Dow Crag and the Old Man).

Follow the path from Goat's Water up to the saddle (col) of Goat's Hause. As you come onto level ground at the top of the pass turn sharp right towards the summit. Looking left on the summit approach notice the zigzags, which will be your return route.

After enjoying the views from the summit, head down the zigzags towards Low Water, a green banked tarn sheltering under Brim Fell (the adjacent peak). Turn right after Low Water and head towards Lake Coniston. Pass through the old mine workings and turn right to head towards the gated car park you walked through at the start of Walna Scar Road. Keep on the path, passing a side path on the left and continuing to the next junction, where you take a left fork (the right fork goes to the gated car park). On the hill to the left notice the cascade of Levers Water Beck.

Go through a gate in a wall and head towards some cottages. The path now follows the stream (Levers Water Beck) leading towards another wall. Go through another gate and past a waterfall.

Pass the Miners Bridge (don't cross it) and continue ahead, keeping the back on your left. Pass through two more gates, the second of which comes out onto the road near the Sun Hotel. Walk down the road back to wherever you parked.

The Old Man of Coniston is an easy climb by Lakeland standards and offers no major challenges. All the paths can be traversed upright, without resorting to a hands-and-feet scramble. It is steep, however; especially the section from Goat's Water up to the pass at Goat's Hause, and it is subject to the sudden weather changes common to Lake District peaks. Distance - 6 miles. 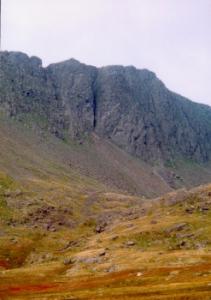 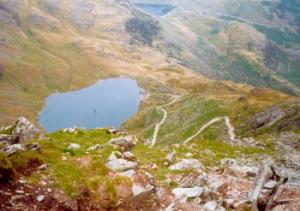 Coniston  is a popular tourist village with a wide range of facilities for such s small community. It is well provided with pubs, hotels, guest houses and shops, including a couple specialising in outdoor and walking gear. The village is set back from Lake Coniston and does not have a frontage to the water.

Coniston Water was known as Thurston Water until quite recently, but became internationally famous under the "Coniston" name when Donald Campbell chose it for his assault on the world water speed record. His fatal accident there in 1964 was back in the news in 2001 when his boat "Bluebird" and his body were finally recovered from the depths of the lake. It is a tree-lined, long and beautiful lake with some boat traffic, but not too much to disturb its tranquility. 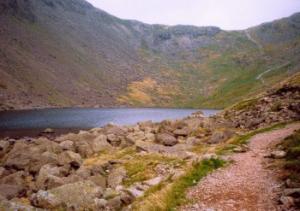 Dow Crag, at 778 metres (2529 feet) is not much lower than The Old Man, but less bulky overall. However, the steep cliff that looks down on this route is craggy and forbidding - an unforgettable profile. 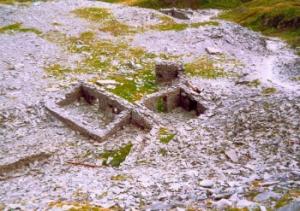 Lows Water is the grass banked tarn you pass on the return route, following your descent from the summit via the zigzags.

Goats Hause is a pass lying between the peaks of The Old Man of Coniston, Dow Crag and Brim Fell and is the meeting point for paths leading to these peaks and across to Seathwaite Tarn and the Langdale Pikes.

Goats Water is the isolated tarn lying under the shadow of Dow Crag. 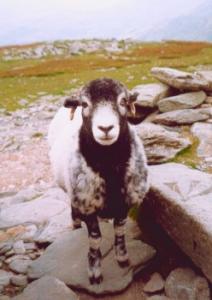 Mine workings - Stone quarrying ended here in the late 20th century and the mine buildings and much of the equipment remain here on the mountainside, gradually crumbling away. The ruins are accessible - but be careful!

Summit sheep! - They look sweet, with their curly horns and innocent faces, but watch out for these practiced robbers! The sheep at the summit are accustomed to people and have learned that walkers carry sandwiches. They will boldly sneak up behind you and steal your lunch from the rucksack, or even snatch it from your hands.

Walna Scar Road is a green road that runs over several low passes to Seathwaite and, via several linking green roads, to many other destinations in southern Lakeland.