From the beauty of Grizedale, the path rises steadily to the awesome challenge of Striding Edge. It's easy after than!

Helvellyn is popular, but challenging, and is one of Britain's classic climbs. Overlooking one of the country's largest lakes, it offers potentially superb views - but that potential depends on the weather!

Leave Patterdale in the direction of Glenridding and walk past St Patrick's church to Grizedale Bridge. Immediately before the bridge take the left turn and follow the minor road past Patterdale Hall and on up until the road begins to descend. Notice a bridge on the right crossing Grizedale Beck; turn right on the footpath to cross the bridge and go straight ahead to a gate. Cross the field up to another gate. In fact, there are two gates, so take the left one and turn half left to follow the footpath up the hill, following the sign to Hole in the Wall and Helvellyn.

Go through a kissing gate and climb steadily to another gate, then continue the long, slow climb (much of it on rough cut steps) to the Hole in the Wall (actually just a stile through) over a stone wall.  [Walkers wishing to use Swirrel Edge in both directions should turn right at this point, using the alternative route - see below - and go over the ladder stile.]
Cross the Hole in the Wall stile and continue ahead, following the path along the right of the ridge (accompanied by cairns). 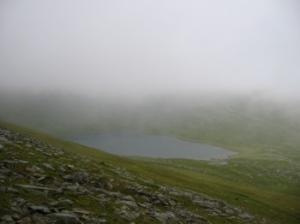 Red Tarn soon comes into view on the right. Continue up to the large rocky mound known as High Spying How. Clamber a few paces up the How then follow the path down to the right and round the How to the start of Striding Edge.
The path mostly runs along the right of Striding Edge but loops to the left in places, where the walk becomes more of a clamber. The trickiest part is a rocky section at the end, which sets you on the final walk to the summit (passing the Gough Memorial Stone).

From the summit, continue along the edge and turn right by a cairn to traverse Swirrel Edge along the opposite side of the corrie. Bear right at the end of the arrÃªte and veer down on the path towards Red Tarn. As you come level with the outflow end of Red Tarn take the path on your right leading straight towards the Tarn. Cross the outflow stream and continue to follow the path across the valley until the ladder stile comes into view. Cross the ladder stile and find yourself back at Hole in the Wall, from where you retrace your steps back down to Patterdale.

Alternative Route from Hole in the Wall
As you approach the Hole in the Wall stile, notice the alternative ladder stile to the right. Go over the ladder stile and follow the path half left, heading towards the centre of a large corrie. You are heading directly for Red Tarn and, as you come to the stream that flows out from the Tarn, follow the path round to a T-junction. Turn left and head up the right face of the corrie. The path leads direct to Swirrel Edge. Follow the path along Swirrel Edge and turn left at the end to walk up to the summit.

With a linear distance of 7 ½ miles and a vertical height of 950 metres (3087 feet) this is a serious walk. The added challenges of Striding Edge and, to a lesser extent, Swirrel Edge, make it a walk that demands respect. Some sections are more of a clamber than a walk and Striding Edge should not be attempted in high winds, when it can be quite a scary place to be. Alternative directions are included for those who prefer to use Swirrel Edge both ways. 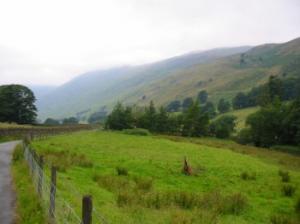 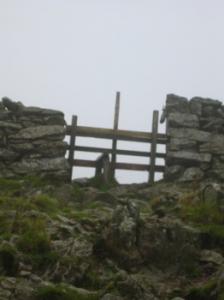 Glenridding - Lakeside village and steamer embarkation point for trips on Ullswater, this is a popular Lake District resort and is well provided with hotels and pubs. Parking is more expensive in Glenridding than in Patterdale, although Glenridding is a good alternative starting point for the walk if you are already staying there (set out towards Patterdale and pick op the route at Grizedale Bridge).

Grisedale is the valley you pass through in the early stages of the walk and that you look down on as you climb to the Hole in the Wall. and a pretty sight it is in most weathers. If you are lucky enough to be in sunshine it is stunningly beautiful - but sunny weather can rarely be guaranteed in the Lake District. 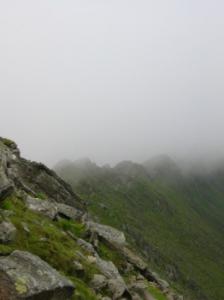 Hole in the Wall - Probably the best-known stile in the country, for that is all it is really. Hole in the Wall is a crossing point where several Helvellyn routes converge and pass through or over a stone wall.

Patterdale - a quiet village at the foot of Kirkstone Pass (one of Lakeland's most delightful road routes). A popular starting point for Helvellyn climbs (especially for those staying at the Youth Hostel) the village also has a hotel and several guest houses.

Striding Edge - Probably the most notorious ridge walk in Britain, Striding Edge is the arrette surrounding one side of the cirque (corrie) containing Red Tarn. It is an exposed ridge, which becomes frightening and potentially dangerous in high winds. In calm weather it is merely challenging. For most of its length, the path runs alongside the ridge but, in a couple of sections, it is necessary to clamber over rock mounds that take you to the very top of the ridge.

Swirrel Edge - less challenging than its partner, Swirrel Edge is the opposite arrete of the corrie. The path runs inside the ridge.

Ullswater - second most popular lake for cruising in the Lake District, Ullswater is particularly impressive because of the way the surrounding hills hem it in and are dramatically reflected in the water. Glenridding is the principle lakeside village.