A walk through ancient history on the gorgeous chalk downlands of Salisbury Plain.

Combining scenery with history, this is a walk to take slowly, with generous allowance to stop, to investigate and simply to gaze in wonder. This region is rich in remnants of our prehistoric heritage and the walk takes you cloes, or right into, these ancient scenes. 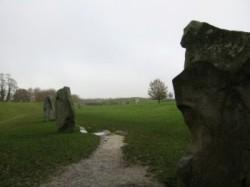 Walk to the corner of the Car Park (diagonally opposite the entrance) and follow the metalled path toward the National Trust museum and shop. Pass through a gate, pass the bank and ditch of the Avebury Stone circle and catch your first sight of the stones themselves. Cross a small road * and continue to the end of the path opposite, where steps to the right lead up to the ridge of the stone circle.

* For an interesting diversion, turn left on the road for about 50 yards and pass through a lych gate into the churchyard. Walk past the left side of the church, go though a gateway and pass the Alexander Keillor Museum. Turn right and go through a gateway, past the Great Barn (now a historical "experience" attraction) and past the National Trust teashop and shop to come out opposite steps that lead up to the ridge of the stone circle.

Cross a stile and follow the stones round to the side of the road and turn right to go through gate onto a footpath (between fences). Cross the road and go through a gate into a field, where two large stones stand close together in a formation known as "The Cove". Walk across the field in the direction of a gap in the bank on the opposite corner. As you approach the bank you will see where the path leads right, down to a gate. Go through and turn left onto a small road. After passing houses and some farm buildings the road becomes a track and climbs gradually to The Ridgeway. 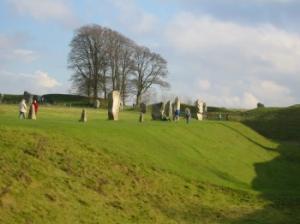 At the top of the hill The Ridgeway turns right but, before continuing on this route, you may like to pass through the gate ahead to take a short diversion to Fyfield Down. Cross the field and pass through 3 gates (close together) to come out onto a magnificent view littered with hundreds of sarsen stones (the material that built Avebury Stone Circle and many of the other monuments in this area). Retrace your steps back through the 3 gates then the further gate when you turn left onto The Ridgeway.

Walk along The Ridgeway, noticing the many copses and mounds that proliferate in this area. Follow the track down to the busy main road (A4) and, just before the road, notice two "round barrows" on the left at Overton Hill. In common with many of the ancient sites around here, these barrows were built by the Beaker People during the Bronze Age. Cross the A4 road and, before continuing on the path, take a look at The Sanctuary, just to the right of the path. This once great stone circle was grubbed up in an act of commercial vandalism during the early 20th century to be put to the plough, but has now been marked out with concrete blocks showing the original layout and positions of the stones. It was once linked to the Avebury Circle by a long avenue of stones. 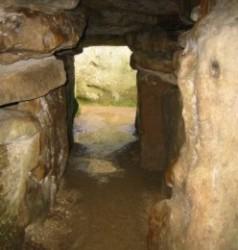 Rejoin the path past another barrow and, where the broad path veers left, turn right into a field and walk along the left edge of the field with the treeline on your left. When you come to a road, turn left and cross a bridge over the River Kennet. Then turn right beside a pumping station to join another path. Where the path forks continue straight ahead briefly under the trees. Almost immediately turn sharp right following a yellow arrow on a tree (this narrow path is easy to miss). Walk along the tree-lined path to a stile, and then cross into a field. Walk along the left hand edge of the field and notice Silbury Hill ahead on the left. Pass a redundant stile into what once was a separate field (now joined) and continue along the left hand field edge to another stile. Cross a lane and continue along the track opposite to a gate and stile. Cross the stile and walk along the right hand edge of another field. Silbury Hill is now directly ahead.

Follow a short path between fences then divert left to follow a path leading up to the West Kennet Long Barrow, which is atop the ridge.

After visiting this impressive ancient tomb, retrace your steps back down to a kissing gate, then cross a bridge over the River Kennet and follow the path to the side of the A4 road. Walk a few yards left along the A4, then cross to pick up the footpath back to Avebury (this is the closest point to Silbury Hill on this walk). Go through a gate and continue along the footpath between a fence and ditch. Go through 2 gates close together and through a gate. Pass through the next gate to come out onto the road (A361) where you turn right and walk back up to the Car Park entrance.

This is quite an easy walk, with just a couple of moderate climbs. The most dangerous parts are the road crossings, particularly crossing the A4. Some parts may be muddy. At 7 miles, some people may find it a bit long but, to appreciate it fully, the walk should be taken slowly.

Avebury Stone Circle -  This is the largest stone circle in Britain and, since stone circles are a distinctively British feature, that makes it the largest in the world. It is so big that it encloses a whole village. Probably built during the bronze age, it fell into neglect over the centuries until it was considerably restored by a nineteenth century enthusiast called AlexanderKeillor (after whom the local museum is named). The site is now managed by The National Trust, who maintain extensive tourist facilities to serve the millions who visit this area from all over the world. However, most tourists remain withim the village confines and a short walk outside Avebury takes you into the open vistas of Salisbury Plain.

Overton Hill round barrows -  In common with many of the ancient sites around here, these barrows were built by the Beaker People during the Bronze Age.

Silbury Hill stands out so strikingly on this broad plan that it must have been an important feature in the age when it was built - but no-one has convincingly established its original purpose. Archeological digs, and a recent spontaneous collapse of a vertical shaft, show that it was originally penetrated by internal tunnels and shafts. But no treasures, skeletons or other conclusive evidence have been found. It is an enigma; a very large enigma that looks like a pyramid and is built of the local soil and rock. Because of its fragility, visitors are prevented from climbing or walking on the hill, but this walk takes you close enough to take good photos.

The Ridgeway This ancient trackway crosses Salisbury Plain, tracing a route that was used long before the Romans came to Britain. Walking this broad path you follow the track of ancestors so distant from us in time that we have no record of their plans, ideas or intentions other than in the stones and mounds that you see dotted around the surrounding Plain.

The Sanctuary - This once great stone circle was grubbed up in an act of commercial vandalism during the early 20th century to be put to the plough, but has now been marked out with concrete blocks showing the original layout and positions of the stones. It was once linked to the Avebury Circle by a long avenue of stones.

West Kennet Long Barrow - This is a prehistoric feature that you can experience close up. This ancient tomb contained many bones that have been safely removed and preserved. The barrow is now open and you can walk inside (stooping to protect your head!) and inspect the chambers at close range.